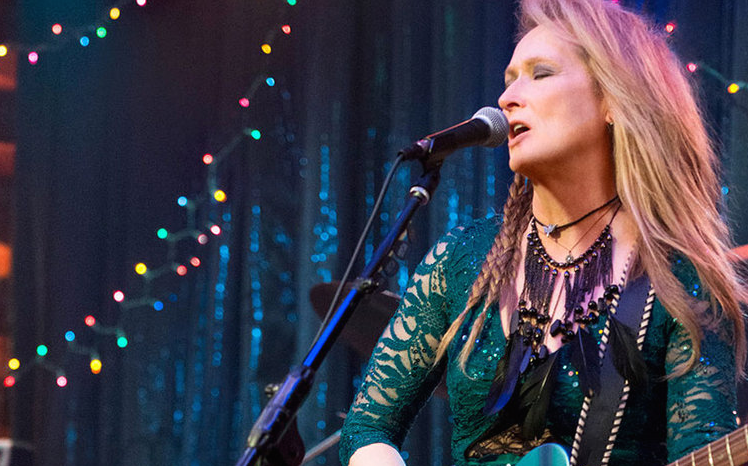 Okay, so let’s start with the marketing. From the bizarrely triumphal and instantly mocked “Get Ready for Ricki” teaser posters to the saccharine, cringe-inducing trailer—and even the title itself—you’d be totally excused if you concluded, like so many have, that Ricki and the Flash was going to be an utter abomination and should be promptly dismissed. Not that the marketers had an easy job on their hands; how exactly does a studio position a movie centered around 66-year-old (!) Meryl Streep playing a rocker chick trussed up like “a hooker on Night Court,” as one character astutely puts it? Their apparent answer was to make it look like the glam-rock sequel to Mamma Mia!, which it most assuredly is not. However unenviable the task, this marketing has done an extreme disservice to one of summer’s most compelling dramedies and finest character studies. They should’ve heeded their own tagline and gotten ready for Ricki.

Streep stars as the titular Ricki, the frontwoman of a Tarzana dive bar’s all-covers house band. Some 30 years earlier, Ricki was Linda, an Indianapolis homemaker, wife of Pete (Kevin Kline), mother of Julie (Mamie Gummer), Josh (Sebastian Stan), and Adam (Nick Westrate). But Linda was a rock singer at heart, and like many (male) aspiring rock stars before her, she chose her passion over her family and fled to California. She released a single album, then promptly lapsed into decades of struggle and compromise. She lives in a shitty apartment, is perennially broke, voted for George W. Bush twice, and works a day job as a cashier at a Whole Foods-style upscale grocery store. But despite the fact that Ricki and the Flash only play covers (ranging from Tom Petty to Lady Gaga, the latter of whom they pensively added to their repertoire to pander to younger patrons) to a small but enthusiastic crowd in a Valley bar night after night, Ricki loves it. She gets to stand on that stage singing songs she loves, and comes alive on each and every anthem she wails at her followers.

In short, Ricki is a dynamic, complex, finely-drawn character—a hard thing to find in any movie, let alone for a woman, let even further alone for a woman of a certain age. As with her screenplays for Juno and Young Adult, Diablo Cody has created a fully-realized female protagonist so fascinating that the story itself is almost secondary. Cody clearly had a ball conjuring Ricki’s sundry specifics and contradictions, and it shows. The attendant storyline involves an unexpected phone call from her ex-husband Pete, who informs her that their daughter Julie’s husband has left her and that Ricki should come home to comfort her. Ricki is caught off-guard by this, since she’s had such little presence in her children’s lives, and the mothering duties have largely been taken over by Pete’s second wife, Maureen (Audra McDonald). But Maureen is out of state dealing with a sick parent, so Pete thinks Ricki should come. And so, with some financial assistance, she does.

When she arrives, Ricki quickly learns that Julie most definitely did not send for her and, having just been abandoned by her husband, wants nothing less than to see the parent who abandoned her as a child. Grace Gummer, one of Streep’s two acting daughters, has never been better than she is here. When she explodes onto the screen in her entrance, you will sit up and take notice. Not only does she resemble the great character actress Brooke Smith, but she invokes her intensity as well. Despite the scorched-earth welcome, Julie reluctantly warms to having Ricki around…which is just one hurdle cleared for a woman who still has two other children to face, one of whom is gay and resents her conservative politics, the other of whom is planning a wedding and hasn’t invited her.

Not very much happens in Ricki and the Flash. It’s a low-key little film that may actually have benefited from an actress of lesser stature than Streep, whose presence immediately qualifies it as a Major Film Event. But Cody and director Jonathan Demme, back in Rachel Getting Married domestic mode, aren’t interested in making a huge, accessible comedy. While much of Ricki and the Flash goes down smooth, it’s not without its edges, specifically in its embrace of a fundamentally flawed female protagonist (a rarity in films despite being commonplace on TV). With the exception of an impassioned monologue Ricki delivers from the stage about sexist double standards in parenting—how it’s okay for someone like Mick Jagger to fly around the world inseminating women in every port but never for a woman to have a similarly disconnected relationship with her children—the film never quite lets Ricki off the hook, nor does it judge her. Just when we settle in to rooting for her and hoping the film will give us an antagonist to hate, that figure arises in Maureen (a lovely turn by McDonald, who can confidently go toe-to-toe with Streep)—only to then flip the script and show us Maureen’s perspective of Ricki, her very understandable reasons for not wanting her around the kids.

Ricki and the Flash is certainly an oddity in the waning days of the summer movie season: a playful, morally ambiguous pseudo-musical about family, sacrifice, and consequence. Some of its understated power is undone by a wish-fulfillment finale that should’ve just been a dream in Ricki’s head, as well as an obligatory “Let’s get out the pot!” boomer comedy moment between Streep and her Sophie’s Choice costar Kline. It may lack the acid bite of Young Adult and the gritty emotional wallop of Rachel Getting Married, but as the vehicle for one of Streep’s most unexpected, disarming performances—and a film built around a female character over 60—Ricki and the Flash is the kind of film for which we should absolutely be ready.