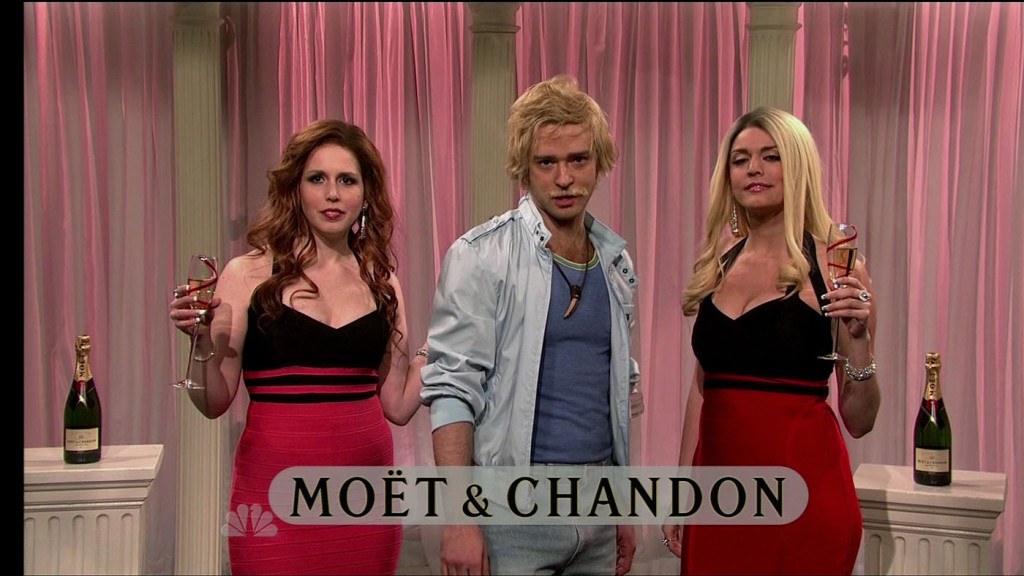 Last night marked Justin Timberlake’s much anticipated fifth time hosting Saturday Night Live, officially launching him into the same superhost stratosphere as Tom Hanks, Alec Baldwin, Paul Simon, and several original cast members, all of whom joined Timberlake for his opening monologue (also: Candice Bergen! Where ya been, Candy?). Timberlake brought his usual comic panache to a slightly-above-average episode; he copped out in his monologue by acknowledging that the episode was bound to disappoint the Internet buzz that had built throughout the week, which felt kinda like a bitch move. And speaking of disappointments, am I alone in being completely bored by “Mirrors,” Timberlake’s second musical number? Yes, granted, “Suit & Tie” is appealingly lush lounge R&B, but “Mirrors” sounds exactly like every power ballad he’s ever done.

Anyway! This week they made the rather odd decision to bury the week’s funniest sketch, “Moet & Chandon,” right at the very end of the show. As with many of the episode’s skits, Vanessa Bayer’s and Cecily Strong’s lifeless former porn stars were returning characters, but they worked so incredibly well. What is it about saying words incorrectly that is so damn funny? Bayer has been underutilized as the straight guy in sketch after sketch over the last few months, so it was good to see her do character humor again; and of course, Strong remains the strongest member of the featured players.

SNL Sketch of the Week: “Outside the Lines”