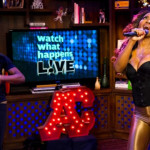 Underestimate Kenya Moore at your own peril! I have been saying that shit for the last few months, ever since I first started to realize how brilliantly she has been playing her first season on The Real Housewives of Atlanta. The bitch is almost certainly crazy, but she’s riding that crazy all the way to the bank. There is a self-aware strategy behind her wild-eyed madness. Can you remember the last time a new cast member joined a Real Housewives show and made herself so utterly invaluable to its dramatic success so quickly? It was already impossible to picture the show without her by the fifth episode. She understands how to play the reality game remarkable well: that you have to risk being unlikable if you want to make your mark (and she made it perfectly clear from the CoochieCrackGate incident in the very first episode that she has no problem being unlikable).

She also understands the business of Real Housewives fame. If you recall correctly, she was already branding her infamous twirl THE VERY NEXT MORNING after she first unleashed it on Porsha in Anguilla. Bitch knows what’s up, although I wouldn’t be surprised if there was some coaching from NeNe involved, as she is the show’s resident catchphrase-branding expert. I’m pretty sure she automatically collects a dollar from your savings account every time you say “bloop”. And Kenya isn’t one to slouch; she’d already devised her inevitable novelty single, “Gone With The Wind Fabulous,” and was prepared to perform it live on Watch What Happens Live almost immediately after the moment first aired. Her shit is AIRTIGHT you guys. She is in charge around here.

And now, wonderfully, gloriously, there is a video. A video that stars none other than SHANGELA as Porsha. It is so fantastic. And can I just say that I genuinely enjoy this song? Because I do. I’m seriously gonna start requesting this shit at weddings.