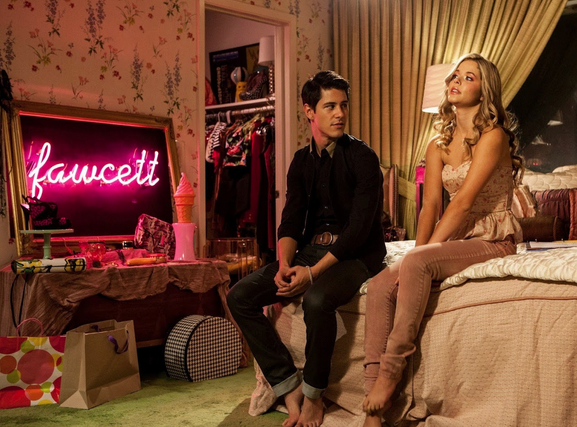 What if I were to tell you that Darren Stein, director of the legendary Heathers successor Jawbreaker, has a new film that’s being described as a gay(er) Mean Girls, with a one-of-a-kind cast featuring Megan Mullally, Natasha Lyonne, Jawbreaker alum Rebecca Gayheart, Sasha Pieterse (Pretty Little Liars), JoJo (!), Mia Rose Frampton (a.k.a. the “little cunt” in the jewelry store who gets Kristen Wiig fired in Bridesmaids), Molly “Sadie Saxton” Tarlov from Awkward., and none other than muhfuckin’ Xosha Roquemore, better known as fluorescent beige enthusiast Joann from Precious?!? WHERE DO I SIGN UP TO WATCH THIS MOVIE, AMIRIGHT?

Well as luck would have it, not only does this movie exist, but you can personally help it get seen! It’s called G.B.F., and is having its world premiere at the TriBeCa Film Festival on April 19, with a festival tour to follow. But making the film fest rounds is just the first step, so Stein, tyro scribe George Northy, and the rest of the G.B.F. team have taken to IndieGoGo to do this thing right: “To complete the film we set out to make, get noticed around the country in film festivals and reach our goal of selling it to a distributor who can put it up on screens around the country.” Check out their official IndieGoGo page to see how you can help (and to check out all the awesome packages they’ve put together to reward their donors).

Social warfare breaks out in a suburban high school when the three clique queens who rule the school compete for this year’s must-have teen girl accessory – the G.B.F. (or Gay Best Friend).

GBF tells the story of two closeted best friends, Tanner (Michael J. Willett, United States of Tara) and Brent (Paul Iacono, The Hard Times of R.J. Berger). Brent longs for the spotlight and has a plan that will make him the most popular kid in school. He believes that coming out will make him instantly popular, as the newest must-have teen girl “accessory”: The G.B.F. Tanner on the other hand, would rather fly under the radar and graduate from high school without ever being noticed.

Meanwhile, Tanner must choose between skyrocketing popularity and the friends he is leaving behind.