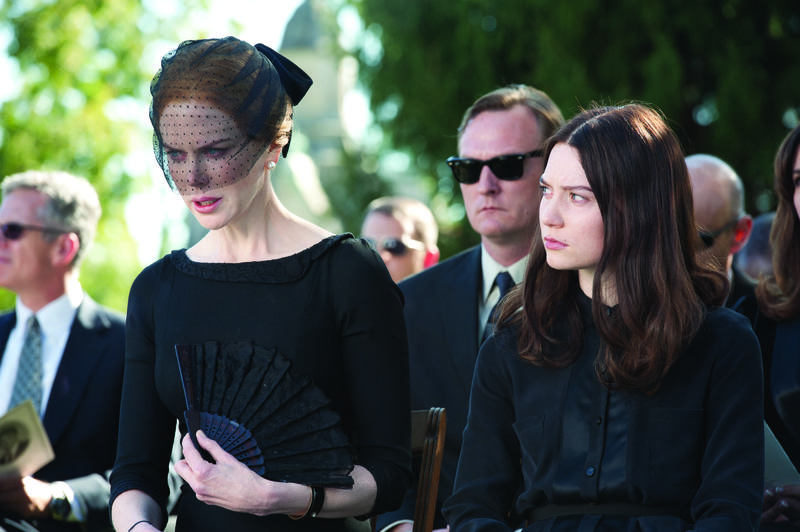 Seductive and chilling, Stoker is a deliciously diabolical psychosexual thriller about an extremely disturbed but impossibly gorgeous and wealthy Connecticut family with no shortage of literal skeletons in their impeccable walk-in closets. Hyper-stylized and exquisitely photographed, it feels like a kindred spirit to Anthony Minghella’s adaptation of The Talented Mr. Ripley: it oozes the kind of elegant nastiness that will make you want to take the most rapturously masturbatory shower afterward (foreshadowing!) – unless you’d rather just sit in the fabulous filth of it all. If you enjoy homicidal, perverted chamber dramas about mothers and daughters competing for the attention of a gorgeous man to whom they are both related, if you’re the kind of person who can barely suppress a smile when remarking, “Oh, that is just sick!,” then Stoker is the movie for you.

Gayly written by the actor Wentworth Miller (Prison Break), Stoker begins just after the sudden death of Richard Stoker (Dermot Mulroney). Left behind are Richard’s neglected wife Evelyn (Nicole Kidman), and their brooding, raven-haired daughter India (Mia Wasikowska), who turned 18 the day Richard died. Evelyn and India don’t exactly have the warmest rapport with one another, and the existing tension in their relationship is dealt an unexpectedly powerful blow by the sudden arrival of Charlie (Matthew Goode, looking as always like a GQ spread come majestically to life), Richard’s brother, whom neither of them knew about prior to Richard’s death.

Evelyn’s panties hit the floor with a ringing dumbbell clang the moment Charlie first looks her way, but India is distrustful of him – or maybe she’s distrustful of the way he looks at her, like recognizing like, or the way that makes her feel, like it’s the first time anyone has really looked at her, looked into her. Also: he is her uncle! So there’s that. Charlie and Evelyn begin parading around together while India sulks, staring watchfully at her newly-discovered uncle as he romances her newly-widowed mother, aware that he’s watching her watch him. But Charlie is far from content to accomplish the child’s play of seducing an older touch-starved widow; India is his real target. He follows her to and from school, showing up unexpectedly at moments both inopportune and crucial. After one particularly fateful intervention, India is forced to confront the truth about herself, the truth that Charlie saw all along. It’s an icky truth.

On my way into my second screening of Stoker, I ran into a friend who was seeing it for the first time. He expressed his excitement as a long-time fan of its Korean director, Park Chan-wook, making his English-language debut after such internationally beloved films as Oldboy and Lady Vengeance. “How does it compare to his earlier films?” he asked. “Oh, you know, it’s a pretty logical progression,” I bluffed to hide the fact that I’ve never actually seen any of his earlier films, which is the kind of thing you just don’t admit to other film buffs. This seemed to satisfy him. After the film, he told me he hadn’t liked it. “It was all style and no substance,” he protested, and all I could think was, Are his other movies not like that? So if you’re an Oldboy fan, you probably shouldn’t expect whatever was so awesome about that movie here. Disclaimer!

But with that said, I’ve never seen Oldboy, so I just loooooooved Stoker. When my friend complained that it was all style and no substance, I could barely restrain myself from shrieking, “I KNOW, WASN’T IT GORGEOUS?” Right from the clever opening credits sequence, it feels like a fabulous ’70s Italian horror film directed by Brian DePalma. It helps that the art direction and costume design give the film an arcane, out-of-time quality; were it not for the handful of references to specific dates, it could have taken place any time in the last 50 years. Chan-wook proves himself a master at creating and sustaining a permeating sense of moody dread that infuses the film’s every frame. The cumulative tension created by the photography, editing, score, and performances is riveting, addictive, and not just a little bit unwholesome.

As India, Mia Wasikowska puts her alien watchfulness to better use than in any of her other performances so far. This is a challenging and complicated character, one that lives almost entirely in her mind; fortunately Wasikowska is gifted enough to communicate that thought life to us in vividly evocative detail. It is difficult to imagine any other young actress playing this role without it descending into parody. Nicole Kidman proves once again to be at her best working with auteurs who aren’t afraid to push her into uncomfortable places. She also offers a master class in how facial filler needn’t be an impediment to expressive acting; just study her face during the wake scene in which we’re introduced to Charlie, or the already-legendary searing glare she delivers with the line, “Personally speaking, I can’t wait to watch life tear you apart.” Chills!

For his part, Matthew Goode looks handsome and chic enough that you’ll find yourself wishing you were the niece he has an incestuous infatuation with; he also establishes himself as the preeminent Suggestive Starer of his generation, flashing his eyes through every conceivable variation of flirty psychosis. Dermot Mulroney, Jacki Weaver, Phyllis Somerville, and my on-camera interview cherry-popper Alden Ehrenreich all make distinct impressions in memorable supporting turns.

Like Carrie by way of Savage Grace, Stoker will be highly satisfying to a very specific audience to which I happen to belong. Am I talking about gay men? Probably. I mean, we’re talking about a perverse female-driven drama with a gorgeous male lead, impeccable art direction, and a touch of camp. Duh. Also, I’m not entirely sure I agree with my friend’s assessment that the film lacks substance. It’s probably not “about” anything, but it would be false to say there’s nothing at the center of Stoker. It’s easy to be distracted by the film’s hauntingly gorgeous surface, but make no mistake: it has a corroded, toxic core.