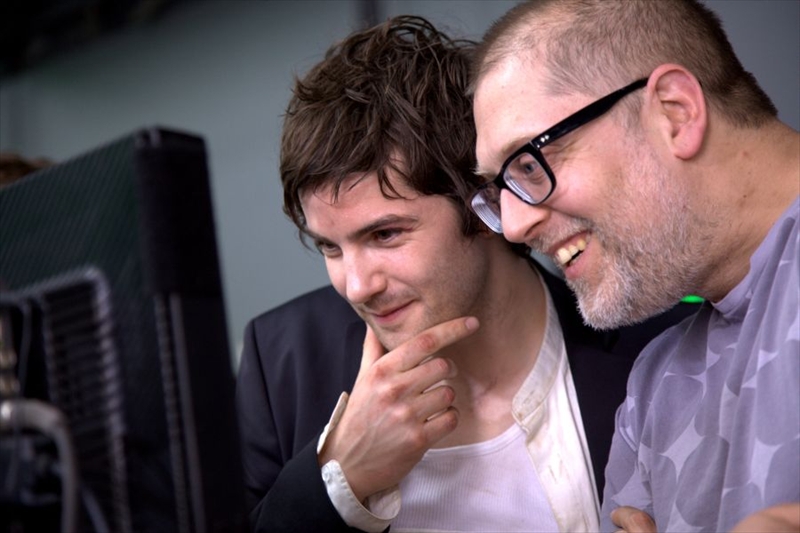 Have you ever had one of those moments where you’re trying to describe something that’s difficult to explain, and then someone else comes along and describes it so brilliantly that none of your meager little baby-thoughts could ever possibly compare? If your answer is yes, and you find that to be an unpleasant experience, then let me give you some advice: don’t ever become a film critic, because that shit happens all the time. Normally I wouldn’t draw attention to it, but while preparing to post my audio interviews with actor Jim Sturgess and writer/director Juan Solanas about their profoundly imaginative but severely flawed new sci-fi romance Upside Down, I came across Roger Ebert’s review.

You know how sometimes the stars align and moon is in the seventh house and Ebert will just craft a totally perfect review that knocks you right on your uninspired ass? This is one of those times. Ebert takes such gleeful delight in describing the many facets of Upside Down‘s astoundingly batshit premise and plot that I can barely bring myself to comment on it; to say anything further feels redundant and unnecessary, if not vaguely heretical. But so as not to be completely lazy, here’s the setup in a nutshell:

Adam (Sturgess) and Eden (Kirsten Dunst – and let’s take a moment to appreciate those character names, because they are not accidental) are star-crossed lovers who live on twin planets. And we’re not talking about twin planets like in Another Earth, where one looms like a moon in the far distance. No, these are closer to conjoined-twin planets; their highest mountain peaks nearly touch, although each planet somehow has its own gravitational pull. The upper world is upper-class, the lower world is lower-class. Intermingling is strictly forbidden, which is bad news for Adam and Eden, since she dwells above and he below. After their zero-gravity makeout sessions (which find Dunst in the unexpected position of filming her second career upside-down kiss) are interrupted by military force and Eden suffers amnesia from a nasty upward fall, Adam sets off trying to navigate his way to the upper world, jog Eden’s memory, and get her back. There’s lots of other ridiculous details I could share, but I’ll leave that to Ebert.

Upside Down may be easy to mock, but it truly is visually breathtaking. Its upside-down twin world visuals were actually created almost entirely through ingenious set construction, not CGI; half of the actors really are upside down in many of the dual-gravity sequences. One such actor that repeatedly found himself hanging head-down from wires while attempting to deliver lines was Sturgess, who filmed Upside Down way back in late 2010, a full year before he filmed another ambitious sci-fi-epic, last year’s cult favorite Cloud Atlas (the postproduction process on Upside Down was involved to say the least). Since breaking out in Julie Taymor’s similarly visually audacious musical Across the Universe, Sturgess has been turning in must-see performances in a diverse array of films, from the Irish crime drama Fifty Dead Men Walking to Peter Weir’s wartime saga The Way Back to Lone Scherfig’s romantic dramedy One Day. Argentinean director Juan Solanas, best known for his acclaimed short film The Man Without A Head, makes his English-language debut with this film.

Listen below as I talk with Sturgess about the finer points of peeing upside down, his lasting bitterness about Cloud Atlas‘ Oscar snubs, and the dangers of working with Kristen Stewart, with whom he is slated to co-star in the upcoming The Big Shoe; I also awkwardly attempt to explain the backlash against his One Day costar Anne Hathaway, which isn’t as easy to describe when you’re talking to someone who actually knows her. Below that, listen to my conversation with Solanas about how he constructed the mythology of Upside Down‘s fantasy world, predicting Sturgess and Dunst’s good chemistry, and what he hopes you take away from his film.

The Binge Interview: Zal Batmanglij on “The East”

The Binge Interview: Lily Tomlin and Paul Weitz on “Grandma,” Feminism, and the Future of “Web Therapy”
Loading Facebook Comments ...