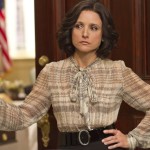 As network television prepares to fully surrender itself to the seductively lazy embrace of reality competition shows for the summer, cable and Netflix (suddenly a vital television presence) are slaving away to give us quality scripted programming to stave off full-on brain atrophy. Some would argue that TV is meant to be shitty during summer because you’re supposed to go outside and enjoy the nice weather, but summer in San Francisco is a wretchedly cold experience, so we really need TV more than ever during these allegedly balmy months.

In addition to the return of their biggest blockbuster drama series, Game of Thrones and True Blood, HBO will also bring back its hands-down funniest comedy, Veep, for a second season. Nothing against Girls and Enlightened, but Veep is a full-on laugh factory with zero interest in profundity, so it handily walks off with HBO’s Funniest Show title. Which is a title I give out now. It’s a bit on-the-nose, but I think it gets the point across. Here’s the season two trailer, which appears to promise more of what made the first season so perfectly hilarious. Veep returns Sunday, April 14 at 10pm.

In other very exciting HBO original comedy news, the network has managed to woo none other than Christopher Guest to follow his last film, For Your Consideration, with a series called Family Tree. Those of us who’ve loved Guest’s films (by which I mean ALL OF US, DUH) have felt moments of panic in the seven years since FYC that maybe Guest had hung up his mockumentary boots for good, so thank you HBO! (Even though you literally canceled Enlightened while I was writing this post, so also: FUCK YOU HBO, FUCK YOU SOOOOOOOO HARD.) Ahem. Here’s their description of Family Tree:

Having recently lost his job and his girlfriend, 30-year-old Tom Chadwick has a rather unsure sense of his own identity. But when he inherits a mysterious box of belongings from a great aunt he never met, Tom starts investigating his lineage and uncovers a whole world of unusual stories and characters, acquiring a growing sense of who he and his real family are.

Meanwhile over on basic cable, the teen comedy Awkward. (MTV’s best scripted offering since Daria) returns for a super-sized 20-episode season. If you’re not already hip to Awkward., it’s basically My So-Called Life reimagined as a millennial comedy; even though it focuses on laughs more than heartache, it is no less observational, insightfully written, or well-acted. Check out the season three trailer.

And finally, Netflix continues to up their original series game with a steamy horror show from swarthy sex-monster Eli Roth (Hostel). Here’s what to expect from Hemlock Grove:

Based on the novel by Brian McCreevy, the show stars Famke Janssen, Lili Taylor, Dougray Scott, Landon Liboiron and Bill Skarsgard, and tells the tale of Peter Rumancek, a gypsy and rumored werewolf who comes to the Pennsylvania steel town of Hemlock Grove around the same time that a young girl is viciously murdered. Roman Godfrey, a member of the influential Godfrey clan that practically runs the town, becomes Peter’s chief adversary and eventual ally as they try to figure out who was responsible for the murder(s).