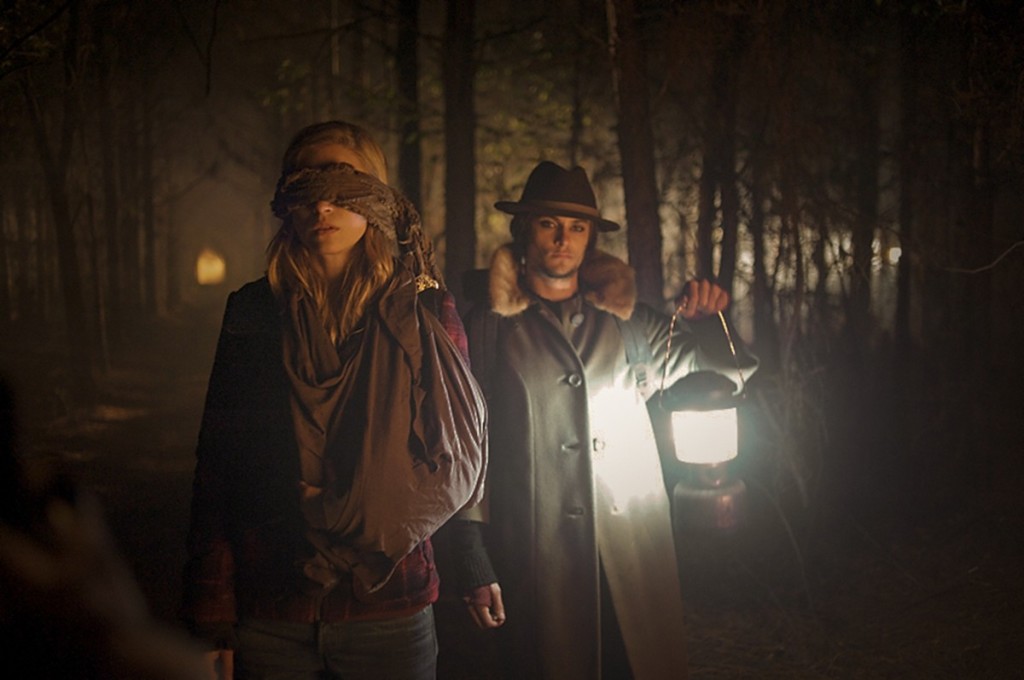 With The East, director/writer Zal Batmanglij and actor/writer Brit Marling prove their determination to endure longer than your average Sundance flash-in-the-pan success story. In a coincidence that proved irresistible catnip to countless film journalists (including yours truly), Batmanglij, Marling, and director/writer Mike Cahill were living together as aspiring filmmaker roommates in L.A. after meeting in college, when Batmanglij and Cahill each directed low-budget movies co-written with and starring Marling. Sound of My Voice and Another Earth were both chosen to show in competition at Sundance in 2011, and both were purchased by Fox Searchlight. And while Cahill continues working on his follow-up, Batmanglij and Marling immediately jumped into production on their second feature together, this time working with a bigger budget and a big-name cast.

Loosely inspired by a summer Batmanglij and Marling spent hoboing around the country with off-the-grid freegan communes, The East is the story of Sarah (Marling), a buttoned-up fledgling operative for a private intelligence firm, who is dispatched to investigate a dangerous group of ecoterrorists (or a highly principled vigilante collective, depending on one’s perspective) who call themselves The East. Headed by the charismatic Benji (Alexander Skarsgard), the members of The East (played by actors like Ellen Page, Shiloh Fernandez, and Toby Kebbell) view themselves as enforcers of accountability for the giant corporations whose crimes so frequently go unpunished in our business-dependent capitalist society; for example, the film opens with The East orchestrating a “jam” (their counterculture-sounding term for an action) against the CEO of a big oil company responsible for a spill, essentially bringing the spill to him by filling his mansion with oil.

These are precisely the kinds of companies that employ Sarah’s intelligence firm to prevent such attacks, so Sarah studies The East and gradually infiltrates them at great personal risk. But the more Sarah learns about the very real motivations driving these people, all of whom have cast off their privilege to focus on living with greater integrity and responsibility, the more she begins to understand them—and the more critical she grows of her employer, embodied by her immaculately ice-cold boss, Sharon (a delicious Patricia Clarkson).

Reminiscent of the socially conscious issue-driven thrillers of the ’70s, The East is a different kind of undercover espionage film. It is unmistakably an activist film, and doesn’t take long to show its hand to the audience; it has the kind of earnestness and passion that only comes when filmmakers truly believe in the story they’re telling. While this will likely win over much of the audience that already constitutes the core for an indie release (and will no doubt make the film a huge smash on college campuses, with Sarah as the audience surrogate for any freshman who’s ever been unexpectedly swept away by collegiate political fervor), its utter lack of cynicism may prove a bit difficult for more jaded audiences to swallow. Aside from a single line in which Sarah ponders why self-righteousness and resistance movements seem to go hand-in-hand, The East never attempts to suppress or conceal its big bleeding heart.

Fortunately then, it is also an efficient and entertaining thriller filmed with a tasteful art house sensibility. Regardless of whether you’re hip to its cause, The East’s narrative is conventional and satisfying enough to deliver an engaging experience. It also refuses to descend into tedious one-sided rhetoric; far from an anti-corporate polemic, it embraces the complexity of its issues, eschewing any reductive black-and-white proselytizing in favor of showing empathy to all sides. But complexity aside, it has a very clear message at its conclusion (somewhat similarly to Argo) that communicates the optimistic idealism at its core.

When I sat down for a roundtable discussion with Batmanglij during the San Francisco International Film Festival, it did not take long for that passion and idealism to start pouring out of him. What ensued was an intensely thoughtful and at times rather heated conversation about The East, privilege, activism vs. terrorism, the appalling true stories of corporate malfeasance that inspired it, and the audacity required to think changing the world is possible. Listen to it in full below. The East opens in San Francisco today, with Batmanglij, Page, and Skarsgard scheduled to do a live Q&A at the 6/8 7:30 screening of the film at the Embarcadero.