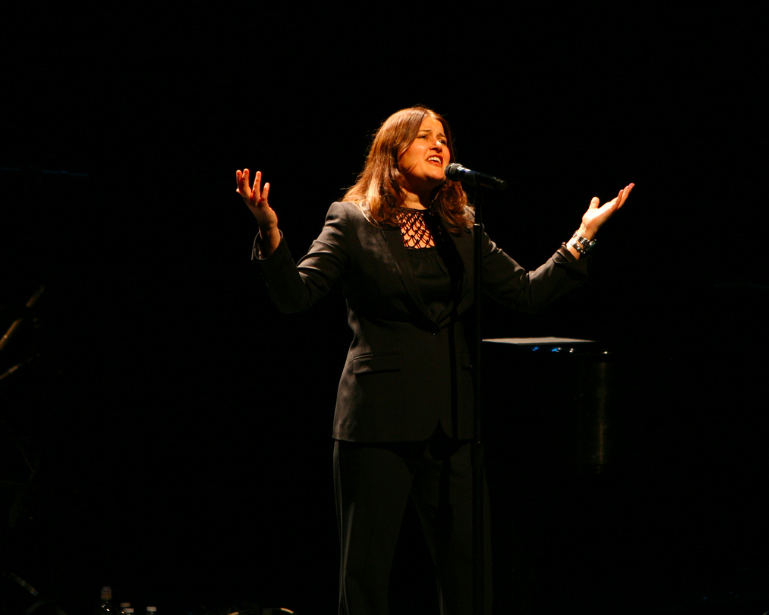 Paula Cole played an immensely fan-pleasing show in support of her seventh album, the Kickstarter-financed Raven, at Yoshi’s San Francisco last night. Taking the stage for two solid hours along with gifted new guitarist Chris Bruce and stalwart longtime drummer Ben Wittman, Cole effusively thanked her fans while speaking candidly about the ups and downs of her career. “To go from popular to unpopular, from cool to uncool,” she mused in her NPR-soothing voice. “And then to go away, and to become a mom, and then to come back and worry if anyone will care…” Perhaps it is this willingness to be so vulnerable, so emotionally available, that inspires such fervent admiration from her fans. Because I am not exaggerating when I say there was some cathartic sobbing going on in Yoshi’s by the end of Cole’s set.

Cole, Bruce, and Wittman took the stage shortly after 8pm as I hunted desperately for my cocktail waitress. After purposefully walking the lip of the stage exuding welcoming energy to the audience, Cole sat at her piano bench and immediately launched into the suitably wistful Raven track “Imaginary Man.” But those eager for her to dip into her earlier catalogue didn’t have to wait long; it was no sooner than Cole wrapped “Imaginary Man” when she purred, “Hold on to your knickers” in a faux-British accent, and launched surprisingly into “Throwing Stones,” the most violent, explosive, explicit track from her breakthrough album, This Fire (1996). Perhaps she just wanted to hit those piercing high notes while her voice was still fresh (although she vocalized over the portion of the song containing the notorious refrain, “Now you call me a bitch in heat and / I’ll call you a motherFUCKER!”).

She then went even further back in her catalogue for “Bethlehem,” a standout track from her debut LP, Harbinger (1994). “I wrote this song when I was still trying so hard to be a goody-two-shoes,” Cole explained. “This was before my rebellion, which I lived out publicly.” Presumably this was a coded reference to her pit-hair period. She followed this with another Raven track, the feel-good female empowerment anthem “Strong Beautiful Woman.” Cole, who was really in storytelling mode, said she wrote it to the rhythm of her own footsteps because she’d wanted to write a song in the old Brill Building style of starting with a melody and fleshing it out from there. I have to admit that “Strong Beautiful Woman” mortified me when I first listened to it on the album. It is unapologetically blunt in its inspirational intentions; if Lifetime could have an official song, it would be this. But Cole is so guileless in her passion and enthusiasm, I couldn’t help but be won over watching her perform it. Any Paula Cole show is an irony-free zone. And the chorus has remained in my head ever since, so her melody experiment paid off.

All that candid talk about her career came before her powerhouse performance of “Comin’ Down,” an appropriate choice for such a segue; it was the opening track of Courage (2007), Cole’s fourth album, which ended the eight-year hiatus following her 1999 commercial disappointment, Amen. Cole said “Comin’ Down” poured out of her in the songwriting stage, and it certainly carries a powerful emotional weight; it is the sound of Cole coming back to life as an artist after so many years of uncertainty and doubt. Then it was back to Harbinger for the plaintive “Watch the Woman’s Hands,” accompanied by ample clapping and hip-slapping, and then all the way back to the present day with Raven‘s pained, embattled “Why Don’t You Go?”, which Cole said she’d written on her guitar using only her thumbs “out of necessity.”

After the darkly dramatic Raven track “Manitoba,” Cole transitioned into the first of several stunningly powerful moments. She introduced This Fire‘s exquisitely beautiful “Hush, Hush, Hush” by explaining she’d written the song while living in San Francisco for a friend who died far too young of AIDS. Despite the fact that I’ve been listening to This Fire for the last 17 years, I never had any idea that’s what “Hush” was about. And it’s not like the song is written in some enigmatic code. I mean, this is the first verse:

And yet if you would have asked me prior to last night what it was about, I probably would have said, “…going to sleep?” So yeah, I’m a moron. Tear out the front page. Cole also noted it was the first of her compositions to become a cover song, being recorded by no less than Herbie Hancock and Annie Lennox. This was a fitting seque for her next song, the Raven track “Eloise,” which Cole said derived from a batch of songs she was commissioned to write for the late, great blues singer Solomon Burke by producer Don Was. Cole noted that while Burke didn’t record the song, she decided to attempt a few different iterations of it, including “a Silver Bullet Band version that should never be heard” (internet: find it!), before settling on the “Springsteen ballad” vibe of the recorded track.

She then launched into Amen‘s only charting single, “I Believe in Love,” which really should have been a bigger hit; it has a gorgeously cinematic Lisa Stansfield quality. And then, the moment from which there was no return. After several highly vocal audience members repeatedly yelled out for This Fire standout “Me,” Cole said that she and the band were willing to play it despite rarely featuring it in their repertoire. But I think she may have been putting us on, because it was indisputably the climax of the evening. After noting that she’d heard from several therapists the song had been helpful to their teenage clients, Cole played its opening chords – and the waterworks just started. Everywhere I looked, grown adults were openly crying at their tables. This was a thing that was happening in public. Cole fed off the energy from all this cathartic release, riffing for several extra minutes at the end in a sort of extended prayer/chant/meditation. We were at a revival meeting at the Church of Paula Cole and this was the altar call moment. In short, Cole and her fans have a lot of feelings.

Cole and her band then took their exit, returning promptly to the stage just a minute later for a generous encore featuring Cole’s three biggest hits (all from This Fire) and one unique cover. They started out with the slinky, sultry “Feelin’ Love,” then straight into “I Don’t Want to Wait” (“I wrote this song for my grandfather, and I know he’s in it because it has wings”). She then lept up from her piano bench to dance through her final two songs, the immortal pop oddity “Where Have all the Cowboys Gone?” (with its attendant irrepressible hip-slapping), and to close, a cover of Dolly Parton’s “Jolene,” which Cole said she’s been covering since 1994. I don’t imagine she’s updated the cover since then either, because she actually beatboxes at the end of it. And that just feels like a mid-90s cover choice, ya know?

This was my second time seeing Cole; the first was at Largo in LA when she was touring behind the very strong Ithaca, her last album before Raven, which sadly went untouched in last night’s performance. And maybe it’s just the difference between the cities (both venues are fairly intimate), but this show was truly on another plane altogether. As Cole mentioned repeatedly between songs, music is about feelings for her, unruly and wild things she cannot wrestle down when they pour out through song. And in this venue on this night, she was enthusiastically met by a roomful of fans ready and eager to go on that journey with her.