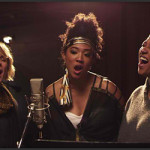 Twenty Feet from Stardom is one of the most superbly entertaining music documentaries I’ve seen. Directed by Morgan Neville, it is the oral history of backup singers in pop music, particularly the African-American women who gradually rose to prominence in the ’60s beginning with the great Darlene Love, Phil Spector’s go-to vocalist. Love is one of many interview subjects on hand to share her story; other interviewees include Judith Hill, the current frontrunner on The Voice, whose career could be in a significantly better place by the time this film opens in NY/LA on June 14.

I was fortunate enough to conduct an interview with Neville and two of his subjects during the San Francisco International Film Festival: Tata Vega, arguably best-known for performing Shug’s vocals in Spielberg’s film of The Color Purple, and the legendary Merry Clayton, whose voice you hear wailing on The Rolling Stones’ “Gimme Shelter.” Look for that interview here on The Binge when Twenty Feet from Stardom opens in San Francisco on June 21.