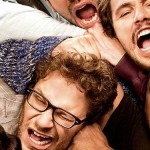 Written and directed by Seth Rogen and his longtime writing partner Evan Goldberg, This Is The End is an action-comedy in which a celebrity party is interrupted by the apocalypse. The entire cast — including Rogen, James Franco, Paul Rudd, Jonah Hill, Jason Segel, Michael Cera, and just about every other schlubby guy to ever appear in a Judd Apatow-related production — star as themselves. Also, hilariously, they’ve enlisted the likes of Mindy Kaling, Emma Watson, and even Rihanna. While it’s certainly tempting to dismiss this enterprise as an exercise in lazy indulgence, I think it’s kinda admirable in its honesty. Because really, when are these actors not playing themselves? Also, the trailer is fucking amazing.