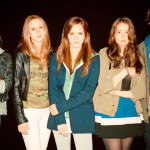 written and directed by: Sofia Coppola

Inspired by actual events, a group of fame-obsessed teenagers use the Internet to track celebrities’ whereabouts in order to rob their homes.

written and directed by: Pedro Almodovar

“Longtime Pedro Almodovar followers who have secretly been hankering for a return to the broad, transgressive comedy of his early work will be thrilled by “I’m So Excited,” a hugely entertaining, feelgood celebration of human sexuality that unfolds as a cathartic experience for characters, audiences and helmer alike.” – Variety

Much Ado About Nothing

screenplay and directed by: Joss Whedon

A modern retelling of Shakespeare’s classic comedy about two pairs of lovers with different takes on romance and a way with words.

written and directed by: Terrence Malick

After visiting Mont Saint-Michel, Marina and Neil come to Oklahoma, where problems arise. Marina meets a priest and fellow exile, who is struggling with his vocation, while Neil renews his ties with a childhood friend, Jane.

Two teens battle their way through a religious apocalypse on a mission to defeat the Antichrist.