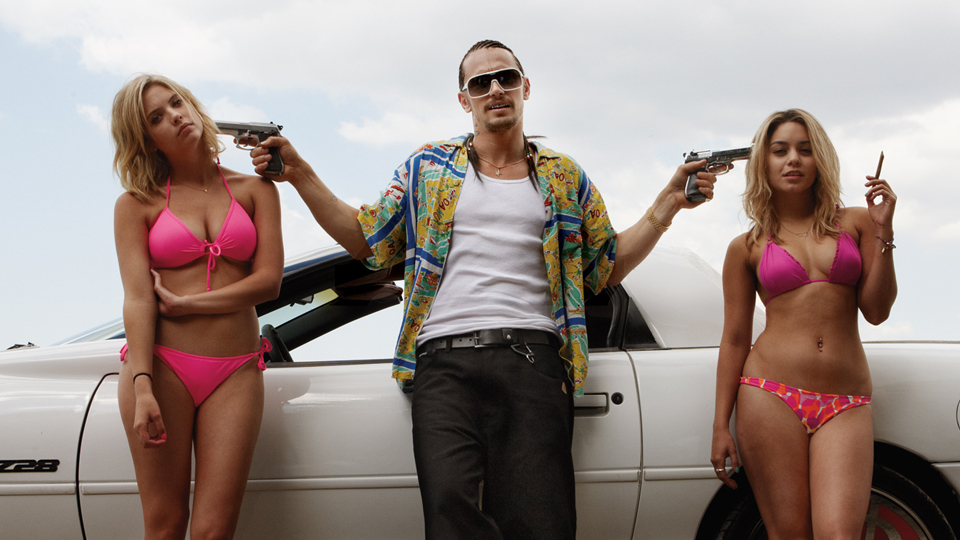 written and directed by: Harmony Korine

On its surface, Spring Breakers may seem like a joke. If one were to study its theatrical poster with no context for the film itself, one would certainly be forgiven for writing the whole thing off as a farce: former Disney tween sensations Vanessa Hudgens and Selena Gomez are vamping in bikinis on either side of – dear lord, is that James Franco in cornrows and grills? And there are guns involved? Come on. Even the punny title begs the audience to write it off as some kind of comedic nonsense, à la Rachel Dratch’s woefully unappreciated Spring Breakdown. The only reason one would give the poster a second glance is if one were to recognize the name of art house enfant terrible Harmony Korine, the film’s writer/director. And if you’re familiar with that name and what it portends, then you’ll instantly understand that the only joke in Spring Breakers is the one it’s playing on audience expectations. And if you do dismiss it based on its appearance, then the joke is on you, because it is one of the most smartly provocative and even poetic American movies in recent memory.

Ostensibly an art film parody of girls-and-guns exploitation that continually disarms its audience with staggering moments of utter transcendence, Spring Breakers is the story of four college girlfriends – Faith (Gomez, who has far more dramatic presence than anyone could have expected, particularly in a scene where she goes toe-to-toe with Franco), Candy (Hudgens, putting that “perennially aroused” quality she has to genuinely disturbing use), Brit (Ashley Benson, towering and indomitable), and Cotty (Rachel Korine, wife of Harmony, feral and fearless) – who are determined to escape the stultifying banality of their daily lives by grasping for what passes as the big brass ring if you’re a dumb skank between the ages of 18 and 23 – spring break, woo! Not that all four girls are skanks. Faith is a good girl, toiling away at Bible study while Brit and Candy sit in class passing each other notes about fellatio (look for Heather Morris, Glee‘s Brittany, as one of Faith’s Bible study pals).

Faith and Candy’s drive to celebrate spring break – in that lush tropical paradise known as St. Petersburg, Florida – is laser-focused and uncompromising, if also completely unexamined. But for Faith, this is a matter of destiny. When the girls realize they don’t have the funds necessary to travel to St. Pete’s and party all week, Faith waxes philosophical about the significance of this trip; she believes it is meant to happen. Faith’s rhapsodizing about spring break lends the film a mythical fairy tale quality – four babes venturing into the Florida wood and unexpectedly encountering the real Florida.

But these babes aren’t quite damsels in distress. Inspired by Faith’s passion, the other three girls decide to rob a diner to get the rest of their funds. Korine brilliantly shows us this sequence twice, once from Cotty’s silent view peering through the diner windows in the getaway car, and then later from inside the diner. The difference is chilling. Both sequences are filmed, like the rest of the movie, with an unimpeachable artistry that is sensuous, dazzling, and just this side of sensory overload; Korine scored a major coup by nabbing Benoît Debie, who lensed Irreversible and Enter the Void for the French provocateur Gaspar Noé, as his director of photography. Funds procured, the girls set off for spring break.

Partying ensues. Very hard partying. Korine and Debie document the partying in relentlessly assaultive detail, as the premise behind “spring break” gradually opens wider and wider into the gaping maw of a quintessentially American black hole. So much beauty. So much terror. Why is there such joy in self-destruction, Korine seems to ask? There is no conventional sense of judgment in Spring Breakers, but there are certain shots of the undulating, screaming, barely-clothed hordes that suggest perhaps a hellmouth has opened up beneath them and they are all dancing to their imminent demises. Korine doesn’t necessarily seem to share his characters’ enthusiasm; many of these scenes have a mournful quality, as does most of the film, thanks to the dreamily atmospheric and achingly melancholy score by the wonderful Cliff Martinez; the score is co-credited to Skrillex, whose music is the digital embodiment of the grinding spiritual wasteland portrayed herein. It is also worth noting that two Britney Spears songs are performed by the cast, including a rendition of “Everytime” that ranks as one of the best uses of a song by any movie ever; tying in thematically with the rest of the film, it digs below the song’s pretty feminine surface to its surging, raw, damaged core. Let’s not forget, that was the video that suggested Britney had slit her wrists in a bathtub following a fight with her boyfriend.

But when one of the parties gets broken up by the cops and the girls get caught with drugs, they are arrested and thrown in jail – until they are bailed out by a man who insists on calling himself Alien (Franco, truly out-Francoing himself with his most inspired and gonzo performance ever), a buffoonish aspiring rapper and gangster who seems to eye the girls as potential molls. This is the Big Bad Wolf turning point in the fairy tale, and Faith knows it. Alien takes the girls away from the tourist Florida they’d been partying in and deep into the heart of the real Florida, which we all know is a nightmare underworld/colorfully lawless swamp. Faith knows something terrible has happened, that their destinies have somehow gone off-track, and that nothing good will come from Alien. But the other girls, particularly Candy and Brit, are devoted to Alien and see no threat in him. They seem to view him as a kindred spirit, with all the ickiness thus implied (Spring Breakers is actually similar to Stoker in this way; both films are about young women whose inner brutality is unlocked or escalated because of a violent older man). This is where Korine’s script flips the Little Red Riding Hood analogy on its head, because this is not a cautionary tale warning young women not to run with wolves. In Spring Breakers, the young women are the wolves.

It’s been over a week since my press screening of Spring Breakers, and I haven’t stopped thinking about it. The filmgoing public hasn’t seen anything like this in a very long time. It is a deliberately but intelligently provocative watercooler movie that dares its audience to draw simple conclusions or write it off as a joke. It is many things at once; its characters are appallingly dumb, and yet it doesn’t feel like we are meant to laugh at them. It depicts crassness and vulgarity on levels that would shame the cast of Jersey Shore, but it shows them with an unnervingly soulful beauty. It is a 40-year-old man directing hundreds of bikini-clad young girls to writhe and strip for the camera, but with enough artistic detachment that it never feels like Korine is directing with his boner. Spring Breakers could have been a grotesquely pervy mess, but with Korine’s many high-wire risks paying off in dividends, it is – against all odds – a truly unforgettable work of inspired artistry.