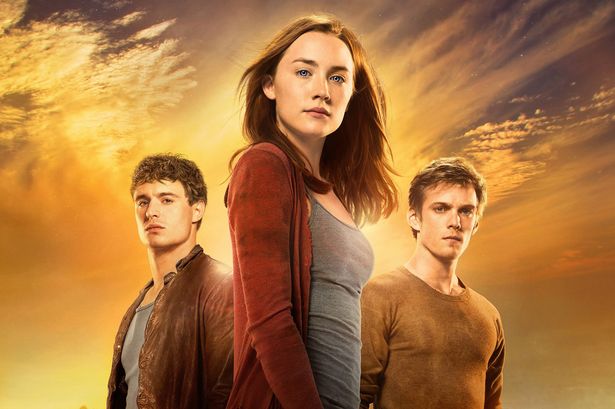 Any fan of Twilight will tell you that author Stephenie Meyer lives for a good love triangle. After creating the human-vampire-werewolf triad that defined romance for an entire generation and introduced the concept of “teams” to affairs of the heart (imagine if this existed in the days of Rebel Without A Cause? Team Plato!), Meyer knew she had to up the ante for her first post-Twilight novel, The Host. She accomplished this by putting a sci-fi twist on the triangle formula: what if the reason a young woman can’t choose between two guys is because she loves one of them – but the alien force possessing her body loves the other? Yes, really. You see, Earth has been invaded by a peaceful yet colonialist alien race that takes over human beings one by one with pacifying, New Age-y “souls” that erase their memories. Melanie (Saiorse Ronan) is one of the last surviving humans who hasn’t yet been taken over – until she is captured while protecting her younger brother (Chandler Canterbury). She is possessed by an alien spirit known as Wanderer, or “Wanda” for short. There’s just one problem: Melanie’s own spirit is too strong to fully succumb to the possession, and her voice continues ringing out in protest within Wanda’s mind (few films in recent memory have depended more heavily on voiceover work).

Melanie/Wanda is, understandably, quite conflicted about this state of being, and soon flees the other aliens to find Melanie’s fellow survivors. She eventually locates a group of them, including her uncle (William Hurt), aunt (Frances Fisher), brother, and boyfriend Jared (Max Irons), living in a large cave in the middle of the desert. But Melanie’s family are ambivalent at best about the reunion; they can see she’s been possessed and now view her as the enemy. Jared is especially vocal about his desire to kill Wanda since she isn’t Melanie anymore, much to Melanie’s voiceover heartache. But then Wanda begins to bond with Ian (Jake Abel), another young man in the cave commune, who likewise begins to develop feelings for her (also to Melanie’s dismay, since she remains loyal to Jared). This schizophrenic love triangle plays out against the backdrop of the aliens closing in on the cave to complete their takeover of Earth.

Before you write The Host off as merely the latest YA supernatural romance nonsense, just know that the film is adapted and directed by Andrew Niccol of Gattaca fame. While Niccol’s post-Gattaca output has certainly been mixed to middling, he has always been a director with a keen, cool, stylized visual aesthetic, which he uses to elevate The Host above its source material. Although she is saddled with more voiceover work than anyone in a non-animated film should ever be, Ronan thrives in the complexity and physicality of her role as Melanie/Wanda. And in the roles of the erstwhile new Edward and Jacob, Jake Abel and Max “son of Jeremy” Irons are suitably smoldering and intense. Abel, 25, previously appeared with Ronan in Peter Jackson’s The Lovely Bones and is perhaps best-known for his work in the Percy Jackson films. Irons, 27, previously flirted with the Twi-verse in Twilight director Catherine Hardwicke’s Red Riding Hood, but seems poised for loftier things: he will play Antonio Vivaldi in an upcoming biopic of his life, and was recently cast in acclaimed director Lone Scherfig‘s Posh. Enjoy my very silly conversation with Abel and Irons about pronouncing “Saiorse,” crazy things girls have said to them, and how to properly film a kiss in the rain in the video above.

The Binge Interview: Derek Cianfrance on “The Place Beyond the Pines”

The Binge Interview: Lily Tomlin and Paul Weitz on “Grandma,” Feminism, and the Future of “Web Therapy”
Loading Facebook Comments ...