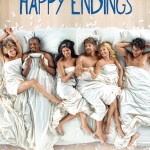 ABC has released the above Happy Endings promo to (A) alert audiences that its new two-episode Friday time slot change starts this week, and (B) apparently to make us think that we have the power to “save” the show. Oh really, ABC? Where’s the Kickstarter? It should come as news to no one that Happy Endings is on the chopping block, since its dismal ratings have never approached its critical acclaim and rabid fan zeal. So yes, those of us who watch Happy Endings will continue to watch it as ABC hastily pairs episodes up two-by-two until the remainder of the filmed episodes have aired, then drops the guillotine and says, “Hey, we tried!” It’s shitty of ABC to make us, the fans, feel as if we’ll somehow be culpable when they inevitably axe the show because it didn’t make them enough money. But for what it’s worth: Happy Endings, one of the most consistently funny and creative sitcoms on network television, will be airing new episodes on Fridays from 8-9pm on ABC, starting March 29th. You should watch it! But don’t feel guilty when ABC cancels it. That’s on them.