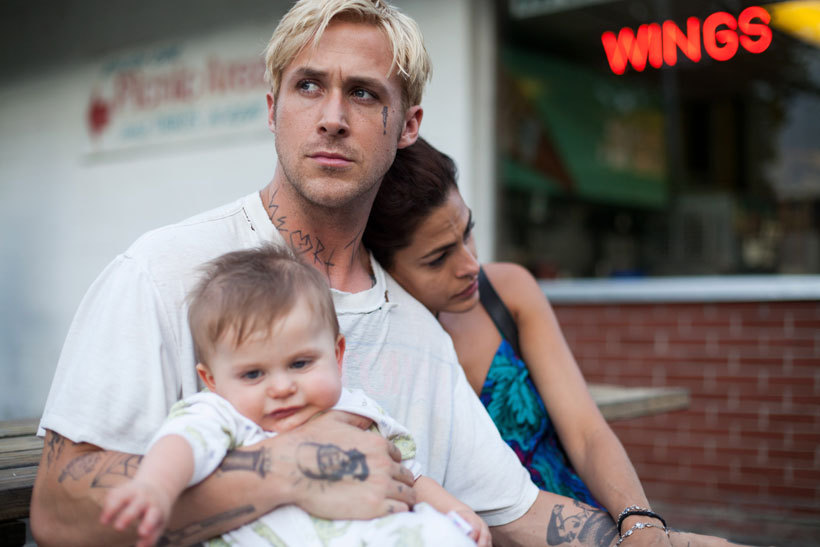 The Place Beyond the Pines is a great big sprawling man-opera from acclaimed writer/director Derek Cianfrance (Blue Valentine). Epic and ambitious, it is a deeply emotional saga with three distinct acts. In the first, we meet Luke (Ryan Gosling in a role admittedly reminiscent of his character in Drive), a motorcycle-racing drifter in a traveling carnival. When the carnival rolls into the New York town of Schenectady (the meaning of which gives the film its title), Luke is greeted by Romina (Eva Mendes), an old flame with whom he’d had a fling the last time he passed through town. But Luke’s rootless existence is permanently altered when he learns Romina got pregnant during their last tryst, making him the father of an infant son. He immediately gives up his carnival life to settle in Schenectady and finds a job as a mechanic to provide for Romina and their son. But when his boss at the garage (Ben Mendelsohn) realizes what a gifted motorcycle driver Luke is, he suggests an alternate method of income as lucrative as it is dangerous: robbing banks.

The second act is about an ambitious police officer named Avery (Bradley Cooper), who becomes a hot-shot local celebrity following his headline-grabbing involvement in a high-profile incident. This mints him in the eyes of his fellow officers, who welcome him into their inner sanctum and leave him with less and less time for his sad-eyed wife (Rose Byrne) and infant son. But when Avery discovers the rampant corruption in his department, driven by the intimidating Det. Deluca (Ray Liotta), he becomes conflicted about how to respond. Not that Avery is a saint: he’s comfortable with corruption when it suits him, and the course of action he chooses is far more in service of his own ambition than any sense of morality or honor. The events of the first two acts are the combustible ingredients of the powder keg third act, which takes place 15 years in the future and about which I will reveal nothing.

A kindred spirit to Clint Eastwood’s Mystic River, The Place Beyond the Pines is an intensely cathartic generational drama about fathers, sons, and legacy. Gorgeously shot by Sean Bobbitt (Shame) and strikingly scored by Mike Patton (Faith No More), it is perhaps most impressive in the way it uses a broad enough scope to effectively capture the rhythms and consequences that connect parents and their children. After Blue Valentine, it is the second film by Cianfrance to use the passage of time as a key narrative device. The performances are solid across the board, with an especially wrenching career-best performances from a de-glammed Mendes; it also functions as a redemption tour for third-act player Emory Cohen, who was saddled with the famously despised role of Debra Messing’s son Leo on the first season of Smash. Cohen is joined by the riveting Dane DeHaan, on a roll from Chronicle and Lawless that will continue later this year with Kill Your Darlings and Devil’s Knot.

Watch my video interview with Derek Cianfrance above, in which he discusses his inspiration for the film, what fascinates him about time as a narrative device, his thoughts on aging makeup, and whether we can look forward to a Place Beyond the Pines blooper reel. Also, I botch the name of the movie right off the bat, but he is gracious enough to talk to me anyway.

The Place Beyond the Pines opens in San Francisco on Friday, April 5.