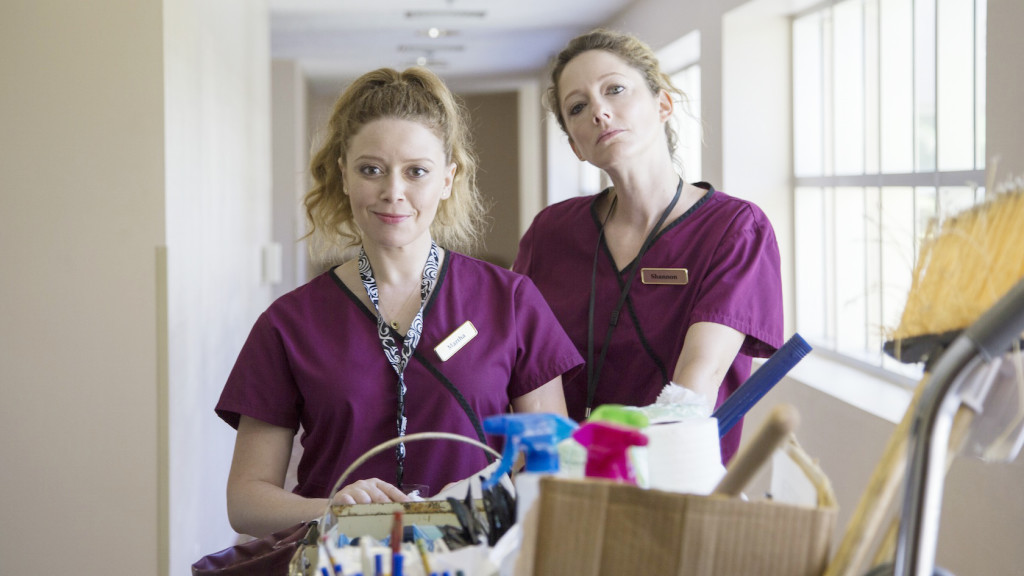 It’s been 16 years since actor Natasha Lyonne and director Jamie Babbit simultaneously achieved cult status with the wickedly hilarious queer classic But I’m A Cheerleader (1999). While Lyonne had been acting since childhood and played the lead in Tamara Jenkins’ acclaimed Slums of Beverly Hills the previous year, it was Cheerleader that struck a resonant chord with an entire generation of pre-millennial LGBT kids still new to the idea of seeing themselves represented onscreen—immediately immortalizing Lyonne and costar Clea DuVall as major heartthrobs in the new wave of lesbian icons.

In the ensuing years, Babbit has helmed several further features and become a wildly prolific TV director (Girls, Looking, Married, Brooklyn Nine-Nine, Revenge, Pretty Little Liars, Gilmore Girls, Nip/Tuck…the list goes on). Lyonne soon fell from her high-profile ingenue status with a very public, very serious battle with drug addiction. After getting clean, she gradually reemerged with one of the most glorious second acts in Hollywood history, as Orange is the New Black made the public fall in love with her raspy, quippy charms all over again (although she’d never stopped appearing in such queer-friendly hits as Joshua Grannell’s All About Evil and Darren Stein’s G.B.F.). And now, Babbit and Lyonne (and, in a cameo, DuVall) have finally given their Cheerleader fans what they want—they’ve reunited.

Available on iTunes and in select theaters today, Addicted to Fresno stars Lyonne as Martha, a timid Fresno hotel maid whose life is turned upside down when her registered sex-offender sister Shannon (Judy Greer) moves in with her and takes a job at the same hotel. But when Shannon accidentally kills a skeezy hotel guest (Jon Daly) during a hookup gone wrong, Martha suddenly finds herself working with Shannon to get rid of the body—although she’d rather focus on asking out Kelly (Aubrey Plaza), her sexy Krav Maga instructor. With an all-star supporting cast including Fred Armisen, Molly Shannon, Kumail Nanjiani, and Allison Tolman, Addicted to Fresno is a character-driven dark comedy kept afloat by the bulletproof likability and relatability of its two leads.

The warped yet poignant screenplay comes from Babbit’s wife, Karey Dornetto, a TV comedy-writing MVP who’s written on shows ranging from South Park and Arrested Development to Community and Portlandia. We sat down with Babbit and Dornetto at San Francisco’s Castro Theatre when they were screening Addicted to Fresno at the Frameline Film Festival—on what turned out to be on the same day that the Supreme Court legalized marriage equality in all 50 states.

So, here we are at Frameline on this historic day. Any reflections on this morning’s SCOTUS decision?

Jamie Babbit: I’m so happy to be in the Castro Theatre on such an important day. Also, as someone who’s already been through gay divorce—I’m on my second gay marriage—I feel like on this day, every gay person has the right to a bad marriage as much as they have the right to a good marriage.

What kind of impact do you think the court’s decision will have on the way we tell queer stories in film and television?

Karey Dornetto: I’m hoping it’ll be more acceptable and not such a big deal. Like, “Oh, of course we have shows about gays and lesbians and trans people.” Hopefully there will be more of it.

Moving on to Addicted to Fresno, you two had been looking for an opportunity to make a film together and considered a number of different ideas. What was it about this one that made you decide to pursue it?

Dornetto: I have an older sister, so I was interested in that relationship. As far as the sex addiction stuff goes, I’m really interested in rehabs, and Jamie’s mom ran a rehab.

Babbit: I made But I’m a Cheerleader as a movie about rehab and my experiences growing up in a rehab because my mom ran one. My brother went to rehab, and I remember when he got out the family dynamic had to shift because he had shifted. I wanted to tell that story of what happens after rehab.

Judy and Natasha are playing against type in castings that could easily have been switched. What special quality do you think they each bring to these characters?

Dornetto: You would think that Natasha would be more suited to Judy’s part, but the character of Martha is kind of lying to herself that she’s happy, and Natasha has something in her own self that suggests that kind of complexity.

Babbit: There’s something about Natasha that will never feel totally happy, there’s something slightly broken [about her]. And that’s the thing about Martha, [her cheerfulness] is a mask—she’s probably more in pain than Judy’s character. So, Natasha gave the character texture. If she had been played by a genuinely happy-go-lucky cheerleader type, Martha would be one-note and you wouldn’t get that she’s wearing a mask. Judy’s character needed to have some redemption because it’s such a hateful character. Judy Greer is such a likable person that with her playing that part, you can find a place to like her.

At the Peaches Christ tribute to Natasha at this very theater earlier this year, which you both attended, Natasha discussed how her memories of making But I’m a Cheerleader are a little hazy. How did the experience of working with her now compare to then?

Babbit: It was nice to work with her this time because I knew what to expect. I’ve known her for 15 years and she’s a friend. When I knew her before and she was in the throes of addiction, it was kind of a wild card. There’s not much you could do except hope that it’s a good day. Natasha works really hard as an actor—she works really hard to memorize her lines, to be on time, and just to be responsible. So, it was really a pleasure.

Having so many great comics and funny people in one movie, what was the scripted/improv balance?

Dornetto: It was definitely scripted, but there was also a lot of improv. Jon Daly is a friend of mine and is a big improv guy. He and [co-star] Jessica St. Clair started off in the same improv group, so they know each other really well.

I was going to ask about Jon. Did he know from the beginning that he’d be dying naked?

Dornetto: When I started writing the script, he and I were working together on Kroll Show, so he knew about the script for a long time. I was like, “Okay, this part is not the best part because you have to die … but you also get to sleep with Judy Greer. So I don’t know, what do you think?”

Babbit: And then I said, “Okay, you’ve gotta tell him that we need nudity.”

Dornetto: I did tell him. He was like, “Well what exactly do I have to show?” And I was like “Just, like, your butt.” Then the first day he came to set, they gave him a little sock for his penis, and it instantly broke when he put it on because it was so cheap. [Laughs.]

Babbit: And then he just used a real sock, right?

Dornetto: Yeah, he just put an actual sock on it.

Dornetto: Yeah. When he came and did the ADR later and I showed him the scenes, he said, “I’m so freaked out looking at my body that I can’t ever see this film. I’m so sorry. I’ll never, ever go to one of the screenings.”

He was posed very carefully on that bathroom floor for maximum modesty.

So I think this is the first movie to license any songs from Sleater-Kinney’s No Cities to Love?

That album dropped in January, so when did they give you the song?

Dornetto: Oh, that’s right! She gave us an early copy. I forgot the album hadn’t come out yet.

Babbit: They were on loan.

Dornetto: We had to give them back.

“Hey, we’re still going to use those.”

Babbit: Right! It was a wonderful company that gave them to us as product placement. I told them we needed to unwrap them all because the whole thing is funnier if they’re not in their wrapping, and then they said, “Okay. We’ll want them back.” I was like, “That’s weird…?” And they said, “No, what we’re going to do is melt them down again because it’s a very specific kind of rubber, so it actually really helps us to have them back so we can re-craft them.”

Very conscientious. So Natasha really let you guys play with her hair in this movie. Where did that Cousin It impression come from?

Dornetto: That was her. [She and Judy] were just messing around, right?

Babbit: Natasha was like, “Oh my god, if you brush my hair when it’s wet…” She has a lot of ideas about her curly hair. In Cheerleader she wore a wig, so for this I was like, “Do you want to wear a wig, do you want to put your hair in a ponytail on top of your head?” I personally really like that latter one and hadn’t really seen it on her since Slums of Beverly Hills. I was like, “I want to make you look different than on Orange is the New Black and I really like Slums, so let’s do the high ponytail.”

I do love a high-pony origin story. Jamie, I read that originally you were thinking of using your hometown of Cleveland as this movie’s setting instead of Fresno, but then you realized you didn’t want to go back there for that long. I went to Kent State, so I can understand.

Babbit: You get it. I was excited in theory, but then when we actually went to Cleveland to dive into the film nitty-gritty of it, I was like, “I can’t deal with this place.”

Do you still have family there?

Babbit: They’re still in the same house I grew up in.

Oh wow. What’s the longest amount of time you’ve spent there since moving away?

Babbit: A week, maybe? We were staying at a hotel downtown doing research [for the movie] across from that 10-foot-tall painting of LeBron James. Then the next year they took it down, and the year after that they put it back up. So there were a lot of ups and downs in that downtown area. [Laughs.]

It’s a conflicted town. Anything else you’d like to add about Addicted to Fresno?

Dornetto: The reactions I’ve been really excited about are from people who’ve had sister relationships, and it really kind of moved them, which is nice. It’s a very funny movie, but also about the two of them. It’s almost like a breakup love story between two sisters.

Babbit: Yeah, it’s like a romance between two sisters in a dysfunctional family. Which is why I wanted to say, in the wake of today’s marriage celebration: we’re no better than any other community. Divorce, marriage, dysfunctional families—we’ve got it all now, guys!

Hopefully now there will be less hesitation to tell these kinds of edgier stories for fear of damaging our crusade for marriage equality … because now we have it!

Babbit: Now we can get really dark!

We can finally be honest and stop lying to everyone.

The Binge Interview: Clea DuVall on Natasha Lyonne, Fan Service, and Her Directorial Debut “The Intervention”

The Binge Interview: Max Irons and Jake Abel on “The Host” [VIDEO]