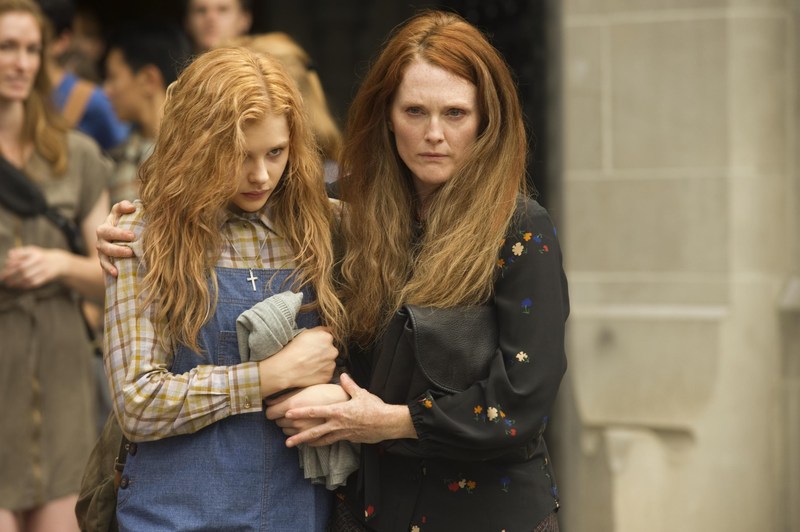 In what I admit may have been a foolish move, I allowed myself to become quite excited for this latest adaptation of Stephen King’s Carrie. While there hasn’t been a single non-disastrous attempt to revisit it since Brian De Palma’s indelibly searing 1976 classic, I felt like I had just cause to raise my expectations. Look at the pedigree here! The director is Kimberly Peirce, who famously made another movie about a brutalized outcast, the harrowing Oscar-winner Boys Don’t Cry. Finally, we could have this quintessentially female story told by a woman who wouldn’t apply De Palma’s lecherous male gaze to the material. And of course there’s the cast: Chloë Grace Moretz, who’s done darker and more interesting work by the age of 16 than many actresses do in their entire careers; the always dependable Judy Greer in the role of the sympathetic gym teacher; and, come the fuck on, Julianne Moore playing the intensely disturbed character of Margaret White. Combine all of that with the story’s renewed relevance in the age of cyber-bullying, and what could go wrong?

Although it is competent and engaging, Kimberly Peirce’s Carrie never amounts to anything more than the palest of imitations. Its most fundamental flaw is its stubborn insistence on remaining as close to De Palma’s film as possible, but stripped entirely of his perverse flair, lacking its iconic performances, and presented with total earnestness. There are entire scenes in which the dialogue plays out literally word-for-word from the original; the first cue that screenwriters Roberto Aguirre-Sacasa (Glee) and Lawrence D. Cohen (who also wrote the De Palma screenplay) don’t intend to veer far from Cohen’s original script comes early, when the (clothed) teen girls taunt a newly menstruating Carrie with singsong cries of “Plug it up! Plug it up!” identical to those in the 1976 version. Beat for beat, it is the same; it even retains the utterly unnecessary and goofy “Shopping for prom clothes” montage, and the new versions of Nancy Allen’s Chris (Portia Doubleday) and John Travolta’s Billy (Alex Russell) even drive the same vintage sports car.

The main reason this is all so problematic is because never for a second does Peirce’s film make you forget your memories of the original (if you have them; if you don’t, this isn’t the review for you)—and more fatally, it offers precious little to commend itself favorably against it. The few triumphs include Greer’s performance as Ms. Desjardin, the character known as “Miss Collins” and played by Betty Buckley in the original. This has always been a kick-ass character, and Greer plays her to the hilt. Where Buckley was overbearing and authoritarian, Greer is empathetic and witty; her sarcasm is also the lone sense of humor on display here, and ultimately she connects more directly with the audience than anyone else on screen. And while this film majorly wimps out on the body count in the climactic prom scene (which is further marred by hokey CGI that doesn’t come close to the primal terror of the original), it does save an especially grisly and protracted demise for head villains Chris and Billy, whose fate in the original film always felt like an unsatisfying afterthought.

The mixed-bag lead performances from Moretz and Moore are problematic in their own ways. In the beginning of the film, Moretz plays Carrie as an over-the-top spazz, all hunched shoulders and panicked eyes. Trust me, you’d pelt her with sanitary napkins too. As where Sissy Spacek played Carrie with an introverted stillness to protect herself from being noticed, Moretz flails around in a way that begs for attention. Peirce’s concept of Carrie’s arc is more rooted in empowerment than victimhood; once she begins to study telekinesis (for which we are still treated to an anachronistic but pleasingly old-fashioned library sequence), we see the mad-scientist sense of possibility on her face as she begins stepping into her power. She learns to control it rather than being controlled by it, and when the prom showdown comes, this sense of control is the key difference in the aftermath. I’d heard a rumor that Carrie actually survived this version of the film, and as the climactic differentiations unfolded, I began to accept that maybe this wouldn’t be such a bad idea, that this could be the film where Carrie finally gets a happy ending. But this is not the case, which ultimately renders Peirce’s empowerment overtures futile.

Moore is faced with the extremely daunting task of stepping into Piper Laurie’s shoes as Margaret White. Laurie’s performance in the original is, simply put, one of the most iconic and unforgettable supporting performances in horror history. She channeled a fiercely evangelical fire-and-brimstone fervor, delivering her frequently ridiculous lines with such bone-chilling conviction that you had no choice but to believe her and run to your prayer closet. Rather than ape Laurie, Moore has come up with her own more subdued conceptualization of Margaret. Instead of a raving zealot, Moore plays her as a quietly paranoid and immensely unstable woman, decades deep into a mental illness that she’s disguised to herself as religion. She is deeply in touch with Margaret’s conflicted feelings toward her daughter, viewing her as a living manifestation of her sexual sin that should never have been born, but also with desperately pleading maternal concern. But here’s the thing about the character of Margaret White: she is a profoundly over-the-top caricature of an extremist Christian, and unless you can find Laurie’s razor-edged balance between grandiosity and gravitas, it is nearly impossible to play without becoming a laughing stock.

And lest we forget that she is by far the most quotable part of Carrie, let’s review just a few of a few of Margaret White’s Greatest Hits that Moore has to deliver with a straight face:

I mean, come on guys. Let’s not forget that Stephen King was just a 26-year-old pervert when Carrie was published. Moore’s astoundingly grave reading of the “dirty pillows” line is absolutely guaranteed to get a laugh, except Peirce’s humorless interpretation of the text allows no room for camp, so it becomes unintentional and embarrassing. De Palma created a complex, anything-goes hothouse atmosphere in which Hitchcockian style, lurid exploitation, and genuinely cathartic emotion could commingle unwholesomely. The only way this adaptation of Carrie could have worked is if the script had been totally overhauled, removing all the overly familiar language and creating a genuinely fresh take on this unforgettable story. Unfortunately, Peirce and her writers bring nothing new to the table except a smartphone camera.