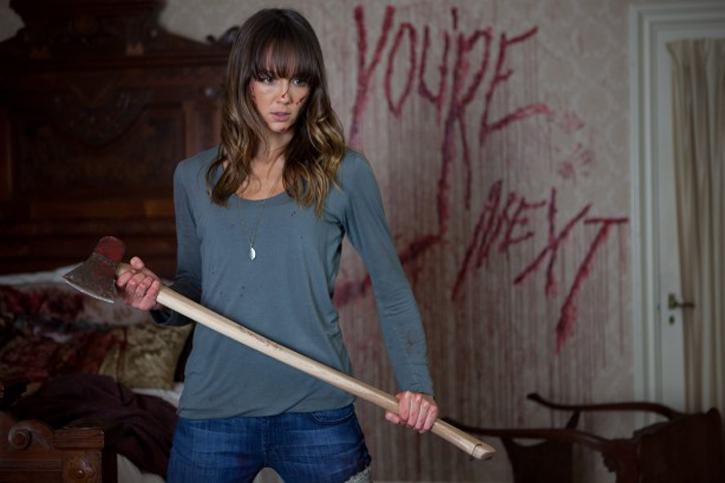 Only the most grizzled horror movie buffs will be unshaken by the relentlessly pummeling brutality of You’re Next, the home-invasion sensation finally taking its theatrical bow this week after a nearly two-year festival tour dating back to the 2011 Toronto International Film Festival. While it earned consistently positive feedback wherever it went (at press time it’s perched at a healthy 80% score on Rotten Tomatoes), it wasn’t until its highly buzzy screening this spring at SXSW that You’re Next mania began in earnest. Its distributor, Lionsgate, launched an appropriately terrifying marketing campaign several months ago, and now audiences can finally see what all the screaming is about.

Even before things take a turn for the slaughterous, it’s not exactly what you would call a loving reunion. Tensions abound between the parents, siblings, and significant others—and those tensions are only exacerbated when an arrow shoots through the window during dinner, burrowing deep into the head of one unlucky attendee. What follows is roughly 45 minutes of unadulterated carnage, rendered all the more harrowing by the reality that these poor bastards are being forced to watch their family and loved ones be brutally butchered right in front of them—and knowing that they, as the title says, are next.

It turns out the Davisons are under attack by a pack of men wearing animal masks; once they’ve decimated enough of the group via arrows and other devices that can be deployed from outside the house, they finally enter the premises—and this is where You’re Next takes a most welcome turn. Just as the audience is beginning to wonder what the hell kind of unforgivingly bleak experience they’ve signed up for (unless you’re into that, you sick fuck), it turns out that at least one reunion guest isn’t going down without a fight. And what a fight it is.

It would be pointless to be oblique about the identity of that character, given that the actress who portrays her is our primary interview subject today. As Crispian’s girlfriend Erin, Aussie star Sharni Vinson (beloved in her homeland for a four-year stint on the soap opera Home and Away, and best-known domestically for her starring role in Step Up 3D and her on-and-off relationship with the superhumanly ripped Kellan Lutz) gives one of the most exhilarating, raw, gritty performances in horror movie history. Most awesomely, Erin isn’t forced to undergo any of the usual sexual degradation horror-flick chicks generally have to experience before unleashing this kind of righteous fury (see: I Spit On Your Grave); Erin’s femaleness in no way inhibits her impeccable survival instincts. As created by writer Simon Barrett and director Adam Wingard (who also collaborated on segments for the diabolical horror anthologies V/H/S, V/H/S/ 2, and The ABCs of Death) and brought to life by Vinson, Erin is indisputably a kick-ass horror heroine for the ages.

I sat down with this trio—first with Wingard and Barrett, second with Vinson—when they were in town promoting their film at the San Francisco International Film Festival earlier this year. Check out our ghoulishly fun conversations in their entirety below.