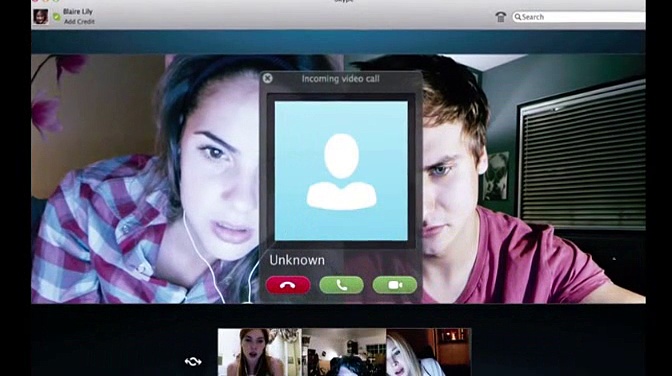 MPAA: Rated R for violent content, pervasive language, some sexuality, and drug and alcohol use – all involving teens

So here’s the thing about Unfriended: it’s marketed as a teen slasher film, but it’s actually a mordant social comedy about the many, many ways teenagers are awful human beings! And while the film does kill off nearly every character it introduces, they’re each so obnoxious and vicious that we don’t feel bad in the slightest for any of them. It’s not like I Know What You Did Last Summer, where we feel kinda bad for the victim as well as for poor Jennifer Love Hewitt, who’s forced into helping her friends cover up an accidental death by the unyielding sexual force that is Ryan Phillippe in a white tank top. Nope! Everyone is this movie is absolutely awful, from the victim to the perpetrators. This makes Unfriended surprisingly appealing to the exact opposite of its target audience: cranky olds who will delight in the vicarious thrill of watching vile, narcissistic youths get offed one by one.

In addition to the lack of a single virtuous character, Unfriended has several other remarkable traits. First, of course, is the manner in which it was filmed and assembled. We spend the entire 82-minute run time looking at the MacBook screen of Blaire (Shelley Hennig), who gets together on Skype with her dopey boyfriend Mitch (Moses Jacob Storm) and their asshole buddies—bitchy blonde Jess (Renee Olstead), drunk douche Adam (Will Peltz), loud-ass Ken (a hilarious Jacob Wysocki), and cunty Val (Courtney Halverson)—on what turns out to be the first anniversary of a friend’s suicide, Laura Barns (Heather Sossaman). Then, inexplicably, their group Skype hang (is that a thing?) is interrupted by an anonymous user they initially dismiss as a troll, but which soon begins to insist across a variety of social media outlets that it’s Laura herself, out for revenge and newly armed with the ability to post incriminating photos on Facebook, hijack your Spotify, or remove the forward option from Gmail.

In addition to the film’s canny evocation of laptop user experience, which borders at times on virtual reality, the MacBook device allows unique access to Blaire’s inner mind; we’re able to ascertain far more about her by watching the times her cursor hesitates or the sentence drafts she deletes than we are by watching her face on the computer screen. Snark aside, it’s a genuinely fascinating approach to character development. In addition to the techie structure, the actors also reportedly filmed the movie in a single take (one of several they shot), which actually makes this the Birdman of springtime horror releases. And given the psychological torture unleashed upon each of them from beginning to end, these performances are a feat worth acknowledging.

Here’s another fun thing about Unfriended: Laura Barns, the suicide victim? Total snatch! Utter, complete hosebeast. This isn’t one of those stories about a poor dumpy nerd driven to suicide—Laura was arguably the queen bee of the group, and from what we see in a recurring video, was a full-on nightmare. And guess what: she’s no nicer in death! This isn’t Jawbreaker, where the benevolent member of the ruling class is killed off by accident. This would be like if Courtney Shayne died at the beginning, then came back to exact revenge on all her former underlings by airing their dirty laundry and murdering them once they’ve been fully humiliated. Why did Heather kill herself, and why does she blame her friends? Dear reader, just you wait until the reveal of the scatological circumstances that led to this massacre. Let’s just say that young Ms. Sossaman must have really wanted this part.

So there you go: you don’t even have to feel bad for the suicide victim! Unfriended is that rare horror movie where you can just sit back and cheer on the deaths, laughing at all the bickering and name-calling along the way. This isn’t a movie that takes its scariness too seriously, as evidenced by the near-comedic nature of several of the deaths, and the general absence of gore. What we have here is any movie or TV show about a bunch of vapid, self-obsessed, disloyal young people (Vanderpump Rules, anyone?) transposed onto a horror setting. Everyone in the story is constantly jockeying for the title of the worst, and since we get to watch them get systematically and unsympathetically dispatched one-by-one, that makes Unfriended kinda the best.