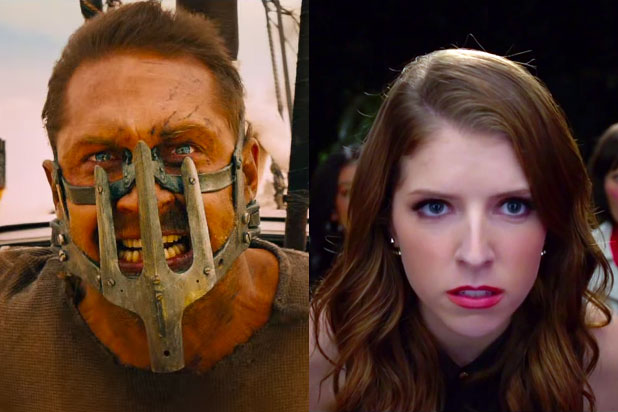 MPAA: Rated R for intense sequences of violence throughout, and for disturbing images

This week at the movies, we’ve got two sequels about groups of embattled young women on intense journeys that will push them to their limits—and, they hope, to empowerment and life-changing victory. Those groups of women are, respectively, college acapella group The Barden Bellas of Pitch Perfect 2, and the downtrodden harem of evil ruler Immortan Joe in Mad Max: Fury Road (technically more of a reboot than a sequel, although it has the same director as the three previous Mad Max movies). While the Bellas are riding high as Pitch Perfect 2 begins, with several years of unprecedented success culminating in a televised public performance for the Obamas, they’re swiftly knocked from their pedestal when a wardrobe malfunction exposes Fat Amy’s (Rebel Wilson) aca-snatch to the entire world. As for the harem—who are named as follows (bear with me): Toast the Knowing (Zoe Kravitz), The Splendid Angharad (Rosie Huntington-Whitely), Capable (Riley Keough), The Dag (Abbey Lee), and Cheedo the Fragile (Courtney Eaton)—well, they’re just tired of being repeatedly raped and impregnated by a deranged warlord whose sadism I imagine also extends to wife-naming.

Enter the journeys of redemption! On the verge of being forcibly disbanded after their public shaming, the Bellas work out a deal: if they can become the first American acapella group to ever win a prestigious international competition in Copenhagen, all will be forgiven. To do so, they’ll have to triumph over the presumptive frontrunners, a cutthroat German collective known as Das Sound Machine. Meanwhile, the harem finds a chance at salvation in Imperator Furiosa (Charlize Theron), one of Immortan Joe’s officers, who covertly absconds with the women from Joe’s scorched-rock palace and sets off to deliver them to safety and freedom. They’re joined in this quest, at first reluctantly, by Max Rockatansky (Tom Hardy), the designated “bloodbag” of sickly War Boy Nux (Nicholas Hoult). When Immortan Joe discovers Furiosa’s betrayal, he assembles a vast, fearsome caravan of all-terrain steampunk war machines and points them all in the direction of her vehicle, with Max strapped to the front of Nux’s car like a mermaid on a ship mast… if mermaids were chained to their ship captains by an IV pumping blood into their weakened veins.

So, yeah: pretty much the same movie! Except one is among the most astounding, jaw-dropping cinematic achievements I’ve ever experienced, and the other has a subplot about Snoop Dogg recording a mashup-driven Christmas album. I’ll let you figure out which is which. Before I go on, let me say that like any other person who isn’t a hate-filled moron, I absolutely loved Pitch Perfect; my original review attests to this. So really, a sequel to such a singular comedy achievement had nowhere to go but down. What was it going to do? Improve on the original? Impossible! The best we could’ve hoped for was a competent rehash of everything that made the first film so delightful. Sadly, this isn’t quite what we get. While it’s perfectly pleasant and fun, Pitch Perfect 2 feels like a just-okay hang session with old friends where you spend more time reminiscing about the old times instead of having any great new ones; also, you realize you all used to be funnier.

One of the ways the sequel falls short is that in the original, we were rooting for Beca (Anna Kendrick) as a sarcastic young rebel shaking up the hilariously outdated tradition of “synchronized lady-dancing”—and clashing directly with its fiercest defender, projectile-vomiting alpha bitch Aubrey (Anna Camp). In the sequel, there’s a decided lack of anti-establishment tension: the Bellas are no longer the underdogs, and although they must battle their way back to accreditation, it isn’t quite as compelling. The film also further exacerbates the original’s primary weakness of relying far too heavily on cheap ethnic jokes, as well as the troubling predatory-lesbian characterization of Cynthia Rose (Ester Dean, who gives it her all and deserves far better).

But far and away the biggest flaw in Pitch Perfect 2 is the character of Emily, a bright-eyed freshman who gets inducted into the Bellas despite their forced hiatus because her mother (Katey Sagal!) was a Bella star back in the day. Man oh man, is this character a mistake—nearly as misguided as the casting of Steinfeld, a talented dramatic actress but by no means a comedian, whose energy is entirely too sweet and adorable to vibe with the playfully edgy comedic tone of Kay Cannon’s script. Steinfeld is nearly as much the lead as Kendrick, and when you already have such a strong, spectacularly bizarre ensemble as the returning Bellas (especially the perennially underutilized Brittany Snow), you simply don’t need yet another “straight guy” added to the mix. Also a big mistake? Casting gifted vocalist Sagal in a movie musical, and then giving us ONE SINGLE FUCKING SHOT of her singing backup in a huge goddamn chorus. Shame on you, Pitch Perfect 2. I was rooting for you, we were all rooting for you!

Way over at the other end of the spectrum, we have Mad Max: Fury Road. Holy shit, guys. This is one of those scenarios where I don’t want to say too much, lest I overhype and ruin it. But I will say that this is an action movie for people who loathe action movies (myself included). Visually, the movie is just astonishing; director George Miller, cinematographer John Seale, and production designer Colin Gibson appear to be taking their cues as much from German Expressionism as from classic westerns. It’s truly eye-popping, even in 3D, with the endless rich hues of golden brown sand setting off the War Boys’ white body paint, the orange flames licking at the arid landscape, and the bursts of colored smoke popping in the indifferent blue skies. Every frame is gorgeous and precisely composed, while the editing by Jason Ballantine and Margaret Sixel is exquisitely fluid, always feeling one beat ahead of the audience to keep us leaning forward in our seats.

Much of the virtue of Fury Road lies in its simplicity: it is, quite simply, a chase movie with a neatly symmetrical structure. We spend the first half watching its characters moving in one direction, and the second half in another. Miller’s sense of showmanship feels both old-fashioned—the film is shockingly free of gore, minus one money shot toward the end—and bracingly modern. The film is gloriously free of the CGI overload we’ve come to expect from our blockbuster adventures, with real locations and incredible mechanical engineering doing the heavy lifting rather than green-screen sorcery. This sense of authenticity gives the film a palpable sense of flesh-and-bone gravity, transporting us into a fully realized dystopia that looks and feels as real as the world around us. Another appealingly simple element is the motivation behind Furiosa’s crusade to rescue these women, which is straight and true. Never for a moment do we question her; instead, we’re invited to share in her revolutionary zeal and determination. Much has already been made about the film’s remarkable embrace of feminism, and with good reason—this is that rare summer blockbuster one can also get behind politically.

So here we are on a Friday in mid-May, before summer’s properly begun, with two very different studio tentpoles hitting theaters on the same day. And yet for all their differences, they’re both ultimately woman-driven stories of empowerment driven by unconventional female protagonists. With Hot Pursuit (a critical and commercial misfire I nonetheless appeciated) already in theaters and Trainwreck, Spy, Terminator Genisys, and Ricki and the Flash still ahead of us, the summer of 2015 is shaping up to be one hell of a winning season for the sisterhood—and it’s about fucking time.