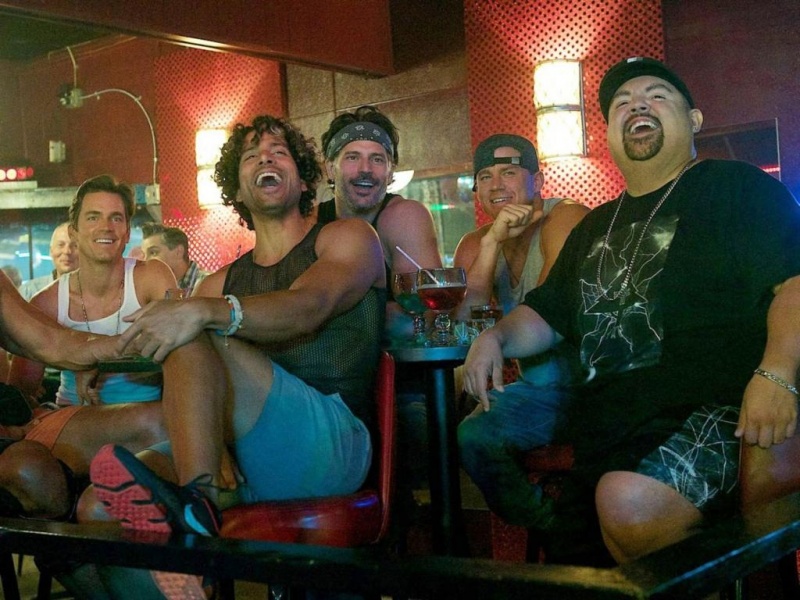 This week at the movies, we’ve got two sequels about frequently undressed men on journeys to make the world a better place, each assisted by a badass woman who’s the key to victory. The first, Magic Mike XXL, is a featherweight romp blissfully unconcerned with the grittier realities hinted at by the first film (which I reviewed at the time for Spinning Platters). The second, Terminator Genisys, is immensely concerned with the the earlier films in its series, but does little aside from echo them, adding approximately jack shit to the franchise in the process. Neither of these films were necessary, but they’re each fun in their own diverting ways. Also, you might be surprised which one has more male nudity.

Feeling less like a real movie than an extended extra its actors filmed for funsies, Magic Mike XXL picks up several years after the seedy happenings of the first film, with Mike (Channing Tatum) having found success as a furniture designer in Miami. But when the old gang comes calling with news of a stripping convention in Myrtle Beach (sure), Mike loads his sweet ass into a winnebago alongside Richie (Joe Manganiello), Ken (Matt Bomer), Tito (Adam Rodriguez), and Tarzan (Kevin Nash) for a chill stripper-bro road trip through the southeast, a.k.a. America’s genitalia. Noticeably missing are Matthew McConaughey and Alex Pettyfer, whose absences are explained in a quick throwaway line prior to hitting the road; the more accurate reasons they’re gone are, respectively, “He fancy now” and “He’s dead to us.” And that’s about it! They drive to Myrtle Beach, where they dance. They make several stops along the way, where they dance as well. Hips are gyrated, ladies are tossed in the air like rag dolls, and a good time is had by all (except those of us who expect nudity from stripper movies—more on that later).

Meanwhile over in Terminator Genisys (which, sadly, is not a reboot in which Genesis from The Real World: Boston is reborn as an avenging cyborg to finally give Sean and Montana their comeuppance), more happens under the opening credits than in the entirety of XXL. The prologue is an entire movie unto itself, except—and this may feel nitpicky but makes a difference—the credits continue to pop up on the screen (in 3D no less) while real action is happening. That’s simply not how it’s done. This is what establishing shots are for, or if you must hit the ground running, why you work in quiet transitional beats so the casting agent or whomever can get their due. This immediately starts the movie on a sloppy, amateurish note, and doesn’t bode well for its remainder.

The year is 2029 or something like that, we’re back in San Francisco (the new go-to destination for apocalyptic blockbusters after Godzilla, Dawn of the Planet of the Apes, and San Andreas), and the robots done gone and fucked us again. Humanity has nearly been wiped out, and our robot overlords are power-tripping like cray. Fortunately there’s resistance leader John Connor (Jason Clarke) … except we find out the robots have dispatched a terminator to go back to 1984 and kill John’s mother, Sarah (Emilia Clarke, the kind of casting you think will be perfect until you actually see her), before she births him. So, John charges one of his soldiers, Kyle (Jai Courtney, who resembles a hot Billy Eichner and radiates an impressively unlikable fratty-banker vibe), to go back in time and save her.

After a homoerotic farewell in which John helps Kyle undress and bids him a misty-eyed adieu as Kyle faces him completely naked, we shoot back to 1984. Kyle quickly discovers that not only does Sarah have this under control, she also has the devoted protection of the Guardian (Arnold Schwarzenegger, somehow still a thing), a terminator with a heart of gold, whom Sarah refers to as “Pops” (if you take a shot every time Clarke exclaims “Pops!” you won’t survive to see Terminator 6). And so, together with Sarah and her Guardian, Kyle embarks on yet further time-travel shenanigans to prevent the robot-led genocide that shaped the bleak future from which he first traveled. (In a technophobic twist, this genocide was apparently executed via trojan horse software that promised to sync all of mankind’s electronic devices. Convenience—don’t trust it!)

The fun thing about the time travel machines in Terminator is that they require anyone who uses them to be completely nude. This is the kind of pervy fictitious innovation one might expect from the creator of Ms. Clarke’s other famous character, except since the time travelers are almost exclusively male, it’s a rare skin-win for the gays. And while there is only one fully revealed ass (Mr. Courtney’s, thank goodness; Schwarzenegger’s is mercifully cloaked in shadows), guess what: THAT IS EXACTLY HOW MANY BARE BUTTS ARE IN MAGIC MIKE XXL. ONE. ONE. ONE. While it may seem prurient to focus on this so much, let’s not pretend bare asses aren’t what we’re paying to see in a Magic Mike movie.

The ass in question belongs to Mr. Manganiello, making it the ass we’ve already seen the most after his frequently nude turn in True Blood (about which he makes a roundabout inside joke in XXL). The ass shot comes very early in the movie in a non-sexual, non-stripping scene; after its appearance, I began a countdown on my watch to see how long it would take before another would appear (am serious journalist). Minutes turned to half-hours, and I began to suspect they were going to make us wait for the big finale before the obvious, inevitable unveiling of Tatum’s ass—the majestic raison d’être for this entire enterprise. Imagine my blue-balled horror when the big stripper-convention finale came, only to reveal at its climax the cast clad in thongs for roughly 10 seconds of screen time. THONGS! Some don’t even turn their backs to the camera! And not even the entire cast! Michael Strahan has one dance sequence clad in gold booty shorts, while Donald Glover barely removes his blazer, let alone his pants. What. The. Fuck.

This lack of nudity is perhaps even more surprising given XXL‘s decided embrace of the gay community, in both the film itself (the characters crash an amateur dance contest hosted by drag queen Vicky Vox at what appears to be a gay club) and its marketing (Tatum and Bomer rode a float in the L.A. Pride parade; Warner screened the film as part of the Frameline LGBT Film Festival in San Francisco last weekend). But while these signifiers would suggest that the Magic Mike crew (like Playgirl before them) got hip to the fact that gay men are just as much, if not more, their target audience as straight women, the rest of it makes it overwhelmingly clear that they’re here for the ladies. What the film lacks in blatant nudity (something gay men are generally more likely to seek than women), it makes up for with plenty of steamy, acrobatic dance sequences in which women are used as passive props, like giggly chairs or batons with breasts. The gays may get a few bone(r)s tossed our way, but these guys are here first and foremost to fulfill female fantasies while retaining their masculine cool and dignity.

On the off chance that we’ve missed this emphasis, we meet the character of Rome (Jada Pinkett Smith, having a blast), a charismatic dude strip club owner who saunters from room to room in her mansion-like house of hotties addressing her female clients as “my queens,” exalting them to feel beautiful with the assistance of her harem of pump-and-thrust pony boys. While gay audiences may choose to embrace the double-meaning of “queen” and believe that Rome’s invitation to partake in her musclebound kingdom is also for us, the film offers nothing to corroborate this. We’re also treated to a sequence in which a room of undersexed middle-aged southern belles (led by Andie MacDowell, always a pleasure) get their dusty clocks rocked by our band of sexual saviors.

Their stripping—nay, their dancing, since stripping implies the removal of clothing—is positioned as an act of gallantry done out of the goodness and generosity of their hearts. This time around, they’re not dancing because they need the cash, but rather because it’s their calling. We never see anything so crassly transactional as money changing hands, except for the showers of dollar bills rained upon them during solo numbers (which we never see them frantically shove into their socks afterward, as in real life). Mike and Co. take an almost missionary-like approach to their noble exploits, as if they’re spiritual healers; rather than touching the hem of Jesus’ robe, the women are transformed by caressing their biceps and cupping their pecs. Meanwhile, the sexual interests of their female clientele are infantilized, depicted as something cute and adorable, as though they’re children lining up for a mall Santa rather than a face-humping from a nearly-nude stranger.

Magic Mike XXL and Terminator Genisys are in theaters now.

The Binge Review: Eight Observations About “The Hateful Eight”