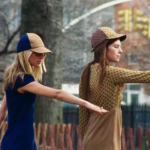 Lena Dunham directed this quirky little fashion short film for Rachel Antonoff’s Fall 2013 line, co-starring Dunham’s younger sister Grace (Tiny Furniture), and narrated with a committed British accent by Girls‘ Adam Driver. The vintage educational film vibe and twee music are immediately reminiscent of Wes Anderson, but the shots of platonic girlfriends sleeping in the same bed and chatting in the bathroom while one of them showers are unmistakably Dunham. Overall: cute!

Dunham also recently penned an essay for the New Yorker about puppies or something. (TL;DR) Also, if you haven’t seen this yet, you have to watch this Lena Dunham parody audition video for Zero Dark Thirty. I have been trying to work out a Dunham impression for over a year with middling results, so it’s really quite enlightening.