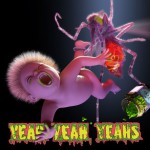 The first time I watched the above video for “Sacrilege,” the first single from the Yeah Yeah Yeahs’ upcoming fourth album, Mosquito, I realized as it ended that I’d stopped paying attention to the song after about five seconds. Not only is the video, directed by Megaforce, the disturbing and visually captivating story of a promiscuous young woman (British model/actress Lily Cole, whom Tyra Banks would say has a very “editorial” look) getting screwed and then murdered by the men (and one CZJ-in-Side Effects lesbian) in her small town, but it’s also told backwards, so you’re constantly piecing together what’s happening. If the YYYs are feeling uncertain about the strength of “Sacrilege” as a single, this sure is a great way to distract from it!

I just watched a second time to pay closer attention to the song, and it’s…fine. The gospel choir sure is an unexpected touch, so I guess Karen O. is having her “Like A Prayer” moment. Sadly, all the gospel singing in the world can’t atone for Mosquito‘s unforgivably ugly album cover, which is basically the grossest artwork Green Day never released.

New Rilo Kiley Video: “Let Me Back In”