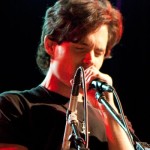 The clip above is from the upcoming biopic Greetings from Tim Buckley, in which Gossip Girl‘s Penn Badgley trespasses on hallowed ground by attempting to portray the man who needed just one album to establish himself as one of the greatest singers of the 20th century: Jeff Buckley. According to IMDb, the film is “the story of the days leading up to Jeff Buckley’s eminent 1991 performance at his father’s tribute concert in St. Ann’s Church. Through a romance with a young woman working at the concert, he learns to embrace all of his feelings toward the father who abandoned him.” In this clip from the film, Badgley-as-Buckley sings the Tim Buckley song “Once I Was.” And yes, Badgley is really singing.

So what’s the verdict? First of all, I have to admire Badgley’s balls in even agreeing to play this part. I have been a die-hard Jeff Buckley fan since Grace came out when I was 12; it’s one of those genuinely timeless albums that never loses even an ounce of its power, even now, nearly 20 years (?!?) after its release. Buckley’s voice was truly majestic; it had this way of tunneling deep into your heart and reeking all kinds of gorgeous havoc therein. If you’re unfamiliar, just listen to the Grace track “Lover, You Should Have Come Over.” You may also be familiar with Buckley’s vocal arrangement of Leonard Cohen’s “Hallelujah,” even if you don’t realize that’s where you know it from; all those vocal acrobatics you hear American Idol contestants attempting with that song certainly don’t come from the craggy-voiced Cohen’s original.

But there I go lecturing you about Jeff Buckley. The subject at hand is Badgley’s performance, or at least vocal performance. And hey – he sounds good! Like, really really good. It’s kind of uncanny. He really nails the softness and warmth of Buckley’s middle register, as well as his heavenly ascents into falsetto. This song doesn’t require him to attempt any of Buckley’s more aggressive or hard-edged vocals, but he really delivers on the Softer Side of Buckley. Unfortunately, there’s also the matter of…how do I put this? His face. Part of what made Buckley such an incandescent live performer is that his face was as beautiful and expressive as his voice. Badgley just looks a bit constipated, and that floppy early-90s moptop isn’t doing him any favors. But if you close your eyes, you’ll feel little tingles of Jeff Buckley magic just by listening to Badgley’s impersonation. And that’s quite an achievement.