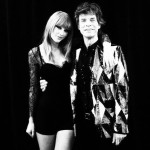 Taylor Swift has declared war on everything I hold near and dear in this world and she needs to stop. She. Needs. To. Stop. First she uses her indelible performance in Valentine’s Day to somehow get herself cast as Joni Mitchell in the film adaptation of Girls Like Us. Then she stupidly goes after Tina Fey and Amy Poehler for making some perfectly harmless jokes about her wildly overblown love life. And now…now…I can’t. Now…she’s really done it.

At a recent Rolling Stones show in Chicago, Mick Jagger began setting up the band’s next song, “As Tears Go By,” by explaining that it was one of the first songs he and Keith Richards had ever written together (as a Faithfull historian, I can confirm that it was indeed the first song they’d written together—it was commissioned from them in 1963 at the behest of Andrew Loog Oldham to be performed by a cherubic 17-year-old Marianne Faithfull, fresh from the convent and having just been discovered by Oldham at a party where he described her as “an angel with big tits.”)

But Mick doesn’t say all that. He just says they wrote it “for a young lady,” which already had me all riled up, because Marianne wasn’t just some rando “young lady” you crag-faced old fucker, she was your lover and partner from 1964-70, the first and best flush of your seemingly endless career, who wrote the lyrics to “Sister Morphine” and inspired “Wild Horses.” Ahem. And if that wasn’t enough of an insult, he then invited goddamn fucking Taylor Swift to whinny out on stage and clip-clop around bellowing this wistful, fragile, delicate elegy like it’s fucking “Man, I Feel Like a Woman” or some shit. Ugh. I just can’t.

For the record, here’s how it’s meant to sound.