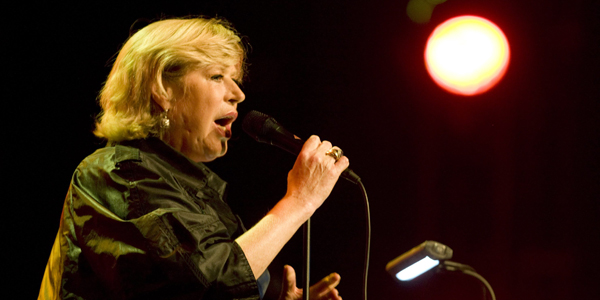 On Saturday night, I had the distinct and immortal thrill of finally seeingMarianne Faithfull in concert. Although she was also playing a free show in Golden Gate Park on Sunday as part of Hardly Strictly Bluegrass, I wanted to see her in a ticketed venue and enjoy a full-length performance; so, I flew down to Los Angeles and drove my ass from one side of town to the other in a rented car on a Saturday night, all so I could see her at Royce Hall in UCLA. And it was totally worth it.

Royce Hall is a huge space, and it looks rather “academic,” for lack of a better term. This suited Marianne, who turns 63 in December, quite well; her father was an esteemed professor and scholar, and she herself was dubbed “Professor of Poetics, Jack Kerouac School of Disembodied Poets” by Allen Ginsberg. She didn’t quite pack the house (which would be difficult, given how staggeringly cavernous the space is), but she held the riveted audience in the palm of her hand for the duration of her 90-minute performance.

For all my hyperventilating excitement, it was a fairly humble, stripped-down show. Royce Hall is a theater and all, but it isn’t a theatre, if you catch my meaning. It’s a bit short on drama and romance. You never quite forget that you’re watching a concert on a college campus. The stage was spare and wide, somewhat dwarfing Marianne and her modest but brilliant four-man band (drummer, guitarist, bassist, pianist/organist/accordionist). No props, no fancy lights, no backup dancers… but then again, my last concert was Kylie Minogue, so I guess my perspective could be a bit skewed.

But what the staging lacked in drama, it made up for intimacy. And, of course, Marianne could be counted upon to deliver plentiful drama and romance with her vocals. She pulled her material almost exclusively from her most recent album, the covers collection Easy Come, Easy Go, and her explosive 1979 comeback album,Broken English. It would be pointless to prattle on about all the songs I wish she would have played, given that she’s been recording for 45 years and has released 22 albums. I was thrilled to hear whatever she felt like singing.

While she admitted to being nervous toward the beginning of the show, her rabid fans (including yours truly) whooped and cheered and gave ovation after ovation until she felt loved enough to relax a bit. She kept her stage banter to a tasteful minimum, although she did make a few amusing comments. Before singing Dolly Parton’s “Down From Dover,” she said she’d recently received a letter from Dolly saying how much she loves Marianne’s cover. “She’s very… nice,” she said, at a very British loss for words to describe Dolly’s gushing Southern hospitality.

Before singing “Salvation” by Black Rebel Motorcycle Club, she made a joke about her infamous ’60s Eurotrash skin flick Girl on a Motorcycle (as I posted previously). And before singing her darkly romantic Nick Cave collaboration “Crazy Love,” she stopped to re-apply her lipstick. “Nick Cave would want me to do this,” she said.

She is a gracious, theatrical, committed vocalist, seeking to create distinct character-based performances out of each and every song. And toward the end of the show she broke out the big guns, doing her most iconic songs back-to-back. Everyone in the audience had at least one “gay gasp” moment; mine came when she sang “Sister Morphine,” her notorious collaboration with The Rolling Stones. When Marianne first released it as a single in 1969, it was banned immediately in England and pulled from the shelves. But when the Stones recorded it two years later on Sticky Fingers, no one batted an eyed. Typical.

As always, the most poignant highlight of the evening was her performance of “As Tears Go By,” which she first recorded in 1964 at the age of 17. The song was the first official songwriting collaboration between Mick Jagger and Keith Richards, and was commissioned for Marianne at the behest of Andrew Loog Oldham.

The lyrics suggest a world-weary maturity that teenaged Marianne could only create by singing in a tiny, sad warble. But now—remarkably still standing after decades of drug addiction and devastating losses, public scorn and suicide attempts, overdoses and living on the streets—when she sings, “It is the evening of the day / I sit and watch the children play / Doing things I used to do / They think are new / I sit and watch / As tears go by,” it is effortlessly imbued with a hard-earned wisdom and sadness that cannot be faked.

In an age where our stars are burning out faster and more violently than ever before, Marianne stands as a figure who did all that shit decades ago and who barely survived her 20+ years as a heroin addict. There is so much to be learned from her story and her experiences, and sometimes it’s as simple as just listening to her elegantly cracked voice and feeling her battered heart pulsing underneath it. She is nothing less than a living legend and international treasure, and I am honored to have sat nearby while she sang her songs for us.

Hold On Hold On

In Germany Before the War

The Ballad of Lucy Jordan

Why’d Ya Do It

As Tears Go By

Sing Me Back Home

UPDATE: I’ve gotten a bit of feedback on her performance in Golden Gate Park on Sunday, and it seems to have gone well. I hope the audience was respectful, as I know her voice is an acquired taste, and there could have easily been a “WTF?” factor for the uninitiated.

Also, Eric told me a story that made me love Marianne all the more. From his comment on my Facebook: “It was fantastic seeing all the parents get visibly uncomfortable while she sang ‘Why’d you do it’ in the park.” Oh. My. Gawd. I couldn’t love this woman more.

If you didn’t know, I generally despise those who procreate, because they expect the world around them to completely change in order to accommodate their little fuck trophies™ (Scott Crayne). When these awful Bay Area breeders saw Marianne onstage, they probably thought, “Oh, that old English lady must be singing some quaint British folk, let’s go listen!” And instead, they were treated to a former heroin addict singing “Why’d Ya Do It,” a wrathful song about sexual jealousy that makes ample use of the words “dick,” “cock,” “fuck,” “pussy,” “snatch,” and (most spectacularly) “cunt.” Awesome awesome awesome.

Also, The Daily Californian points out that Neko Case dedicated her performance of “Hold On Hold On” to Marianne, who had just performed her cover of it an hour earlier. So cool. At least they didn’t duet, because then I would have died of jealousy and spent eternity haunting everyone who witnessed it.

This post originally appeared on The Sassmouth Chronicles on October 5, 2009.