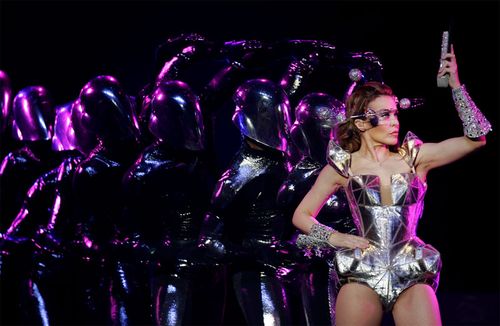 Last night was the inaugural sold-out performance of Kylie Minogue’s first ever North American tour, which she quite intuitively chose to kick off in the Bay Area. It was certainly a historic occasion which had different meanings for different people. For most of the gays in attendance, it was a long-overdue but glorious fulfillment of 20 years of unrealized dreams. For Kylie, it meant she’d finally achieved enough stateside success to launch a wildly successful tour. And for me, it meant that I had somehow failed as a gay man.

Allow me to explain. I often find myself wondering how those gays find each other. You know the gays I’m talking about. The immaculately coiffed packs of D&G-clad, ultra-bronzered, bleached-teeth A-gays with abs and disposable income to spare. The kind that do everything together, like getting brunch every weekend, hitting the clubs, crowding around the free weights at the gym (other people need those too, you dicks), going on group vacations, and seeing Kylie Minogue concerts en masse.

How do they meet? I like to imagine they’re all strippers or models or high-end escorts, so that I can efficiently lump them into an appearance-based “other” group and feel less personally threatened by them. I don’t have gays like that; my own somewhat less shiny gays don’t do those things. And I love them all the same, but I’m still left to wonder how the other half lives. And so, I went to the Kylie show by myself. Not only was I alone; I didn’t recognize a single person. And there was no shortage of people. The Fox Theater was wall-to-wall gay pandemonium.

It basically felt like the world’s biggest gay club: everyone standing around in cliques with their cheeks sucked in and asses clenched, flashing lights, thumpa-thumpa beats, sloppy-drunk homos bumping into you, that unmistakable stench of sweet-scented gay cologne, the floor sticky from all the goddamn spilled gay girlie drinks (my shoes smell like they were used to serve Bay Breezes), and… well, the music of Kylie Minogue.

Since I didn’t know anyone, I had no choice but to stand in place and watch the show while contemplating how these gays became the way they are. I did catch a few puzzled glances being tossed in my direction (“What’s her deal?”), but eventually they were redirected toward a deranged hobo-looking guy with a massive frizzy ponytail and a large Amoeba bag. He appeared to be some sort of Kylie stalker, and kept attempting (and failing) to push through the crowd while waving his ticket in the air. He was later reprimanded by security for attempting to climb a wall to get Kylie’s attention. He was probably my one chance at making a new friend last night, but alas, I missed it.

I didn’t leave the concert with any new insights into how this other gay half lives, but at least with Kylie there, the walls that normally divide the gays into distinct factions seemed to come down a bit, and we were able to all fag out together.

And so concludes the Angela Chase portion of my review. Did I mention Kylie Minogue put on a concert? It was absolutely fantastic. She managed to squeeze all the over-the-top grandiosity of her worldwide arena tours onto a mid-sized theater stage, and somehow made it seem just as huge as any Madonna or Beyoncé tour that I’ve seen. Bitch must’ve had, like, eight costume changes, and looked absolutely stunning throughout.

Her stage persona was pure and unaffected radiance, and she appeared to be having a genuinely great time. Unlike the guarded-fortress divas of this country, Kylie wasn’t above sharing a laugh with her dancers or casually responding to people in the audience. She seemed humble and approachable and sweeter than pie. Also, she sang live. And she really understands her audience (the gays). Her barely-dressed male dancers looked like Raging Stallion porn stars, and even took an onstage shower. Kylie Minogue is an entertainer who truly gets what it means to give the people what they want. Especially if they want thousands of gays.

Check out my friend Gordon’s more concert-oriented review of the show here, and a series of awesome HQ pictures here.

This post originally appeared on The Sassmouth Chronicles on October 1, 2009.