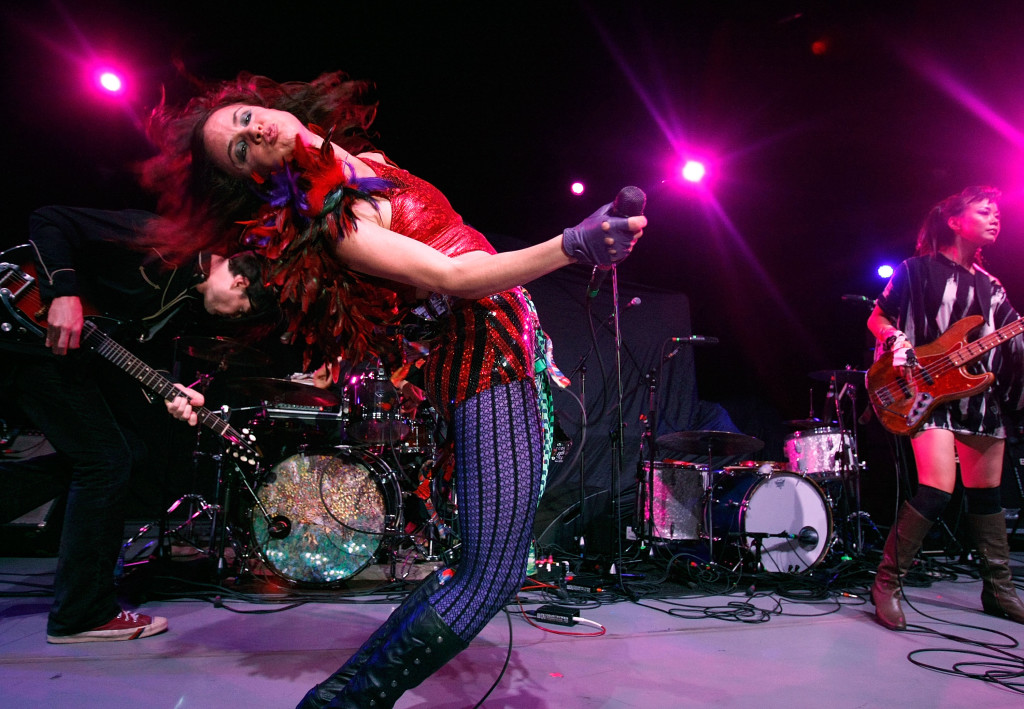 Last night, Wendy and I went to the Juliette Lewis show at Slim’s. If my 14-year-old self could have seen what I saw, he would have screeched until his head exploded. So I guess it’s good I didn’t see it until I was 27.

Juliette Lewis was my first favorite actress (aside from Jessica Rabbit). I can’t pinpoint the exact moment I fell in love with her, but it definitely had something to do with Natural Born Killers. As a timid queer boy growing up in rural southwestern PA and being harassed by dumb-ass rednecks, I gravitated toward women who possessed the power I lacked; specifically, power over men. And not just sexual power, but physical power. I wanted my female icons to draw men in with their sexual wiles, and then to punish them violently for their tacky, predictable lust.

The opening scene of Natural Born Killers fulfilled this desire beyond my wildest dreams, specifically the murder of the redneck at the hands of Mallory Knox (although I always felt bad for that poor waitress):

And it wasn’t just because she was a physically empowered woman. I didn’t have similar fantasies about Bridget Fonda in Point of No Return, for instance. It was because Juliette was obviously a freak (I remember being scandalized by the sight of her hairy pits when removes her fringed jacket), and I was made to feel like a freak for being gay, so I knew she would defend me from the small-minded, go-nowhere fuckheads who made my adolescence so unbearable at times.

Eventually I sent $20 in an SASE (that’s self-address stamped envelope, for you post-snail-mail babies) to a “celebrity address service,” in the days before you could just look up your favorite celebrity on Twitter and spend the night @chatting with them. And I sat there, at the sad little word processor I wrote my reports with in high school (my family didn’t get a computer until I was in college), and composed a letter to her.

I don’t remember what I wrote, but I think I generally expressed my extreme enthusiasm for her work, and encouraged her to sing more. I had first learned that Juliette could sing from her disarming à capella rendition of “Born Bad” in NBK, and then from her covers of “Rid of Me” and “Hardly Wait” by PJ Harvey in Strange Days. The idea of a whole album of Juliette Lewis songs was almost enough to make my heart stop, and I could only dream of a world where she’d actually become a professional touring musician.

Some time passed, and one day I received an envelope from her manager. It contained a signed 8×10 glossy, a form letter that basically said, “Thank you for your support! I’m not personally answering fan mail right now, but here is some literature that has meant a lot to me,” and some Scientology literature. I was between religions at the moment, so I briefly considered becoming a Scientologist (“It it’s good enough for Juliette…”), but the pamphlets didn’t really make sense to me, so I set them aside.

Years went by. As Juliette’s acting career waned, I transferred my obsessions to other actresses (first Rose McGowan, then Julianne Moore). But I still compulsively checked Juliette’s IMDB page to see if she had any new projects on the horizon. My torch for her burned still.

Fast forward to present day. Juliette has been focusing primarily on her music career for the last five years, paying her dues and touring relentlessly. She recently released her fourth album, Terra Incognita, which is produced by Omar Rodriguez-Lopez (The Mars Volta). She has yet to achieve much commercial success, but has slowly gained a hard-earned reputation as one of the most riveting and explosive live performers touring today.

I had my first opportunity to see Juliette perform live at the North Beach Oyster Festival about a year and a half ago. She shared the bill with an eclectic roster ranging from She & Him (featuring fellow actress-turned-singer Zooey Deschanel) to shitty novelty Irish punk band Dropkick Murphy’s. It was a huge stage and a huge crowd, and while I had an amazing time watching her, I very much wanted to see her in a smaller venue. But even in such a large festival setting, she commanded the crowd with the ferocity of Iggy Pop and Patti Smith rolled into one.

And then, last night, I finally got the chance to see her in a smaller venue, along with kick-ass opening act The Ettes. I’m pretty much exhausted right now (I didn’t intend this to become a decades-spanning history of my Juliette Lewis fandom), so I’ll keep it short: She was good! I was right up front! She looked at me! I died!

That’s about it. Sorry for the anticlimax. But seriously, I had to fight for my place at the front of that stage. I was crammed between three opposing and turbulent forces. The first was a pack of methed-up trailer park kids directly behind me, whose style of “dancing” consisted mainly of throwing fists and elbows into my back. The second was a pair of extremely drunk, oversexed strangers — a truly gorgeous young man from Istanbul and a fat girl having the luckiest night of her life — who basically used me as a leaning post while they wildly groped and licked each other.

Here is some video I took from my vantage point. Unfortunately it was too loud for my iPhone to record sound, but this will give you an idea of how it all looked.

This post originally appeared on The Sassmouth Chronicles on October 14, 2009.