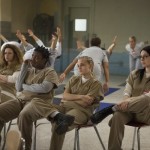 Are you done repeatedly binge-watching the new season of Arrested Development and ready for another Netflix comedy from the creator of a revolutionary ’00s TV series? Well you’re in luck, because Weeds creator Jenji Kohan (whose name I will always see in a pot leaf) has a new show called Orange is the New Black coming to Netflix in its 13-episode entirely on July 11. Based on Piper Kerman’s memoir about a year spent in prison, it stars Taylor Schilling (whom I enjoyed in the otherwise shiteous Nicholas Sparks flick The Lucky One because she kinda reminded me of Melrose from ANTM) as a woman who gets locked up as a consequence of her relationship with a drug dealer. Jenji Kohan definitely has a type, huh guys?

The cast also features Laura Prepon, Taryn Manning, Kate Mulgrew, and the very exciting American Pie reunion of Jason Biggs and Natasha Lyonne! Just kidding, I’m only excited about Natasha (who is also quite hilarious in the upcoming G.B.F.). And if a “nice white lady” running afoul of the law due to drugs and making colorful ethnic friends isn’t enough to remind you this show is from the creator of Weeds, the trailer also makes prominent use of a song from Rilo Kiley’s The Execution of All Things, “A Better Son/Daughter,” just as Weeds powerfully used the album track “With Arms Outstretched” in its final sequence. But hey, I ain’t mad at that.