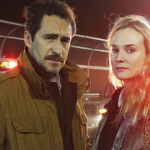 As a tonic for all these grotesquely desperate Upfronts sizzle reels, let’s watch a trailer for the latest drama from the most dependable basic-cable purveyor of quality television: FX. I’d certainly grown curious about The Bridge from the many cryptic teasers FX ran during the endlessly fascinating The Americans (was anyone else really into that show?), but the teasers gave away absolutely nothing, so I had no clue who was in it or what it was even about. Well, now I know! From Vulture:

FX’s new serial-killer drama The Bridge is an adaptation of the Danish and Swedish series Bron/Broen — and that show is goddamn fantastic. In the original, a body is found right in the center of a bridge that connects Sweden and Denmark; in the American version, the body is found on the Texas border between the U.S. and Mexico. Thus law-enforcement from both countries gets involved! Diane Kruger plays the American detective (detached, unemotional), Demián Bichir plays her Mexican co-worker (married, kids, warm), and we all play people who have room in our lives for one more serial-killer show.

Oh man, sign me up so hard. Both leads are fantastic and frequently underutilized actors, which makes them perfect for FX (would anyone ever in a million years have guessed Keri Russell was capable of the kind of darkness and dramatic intensity she displayed on The Americans?). Very excited for this.