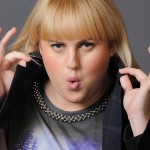 First of all, does anyone else think of nothing except The Comeback during every single upfronts season? That show was so precise and unsparing in its immortally satirical portrayal of the pilot season experience, it almost ruined TV for me permanently. Seriously, how can you watch any new show without picturing all that behind-the-scenes fuckery? Damn you, The Comeback, for being far too amazing and prophetic for your own good.

With that said, are you ready to see Rebel Wilson as a sitcom star? Because that’s what you’re getting this fall on ABC, when she stars opposite perennial deadpan second banana Liza Lapira in the new comedy series Super Fun Night. Watching this, I had to wonder if Wilson’s charms, which serve her so well in the comic relief role, won’t maybe become a bit tiresome when she’s the lead? I guess we’ll find out later this year.