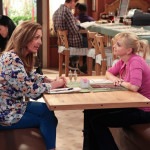 When I heard that the wonderful Anna Faris had been cast in a sitcom, I was pensively excited; it would certainly be a step down from being a movie star, but since her last several projects have bombed, it’s better than no work at all. Then I heard her sitcom would be on CBS, which sank my heart immediately. CBS has, by far, the most insipid and unfunniest programming of all the networks (their ongoing ratings victory is just further evidence of the appalling stupidity—and also the advanced age—of the average American TV viewer). And not only would it be on CBS, but it would be produced by hackmeister general and noted enemy of everyone from Roseanne to Charlie Sheen, sitcom baron Chuck Two and a Half Men Lorre. Doom. DOOOOOOOOOM.

Well, Faris’ show (called Mom) got picked up, and now we have our first look at it. I guess maybe I’d crazily held out hope that it would be a single-camera sitcom; how do you cast talent of this magnitude (Allison Janney!) and then sacrifice it at the alter of multi-camera laugh track mediocrity? Let Chuck Lorre show you how in the above featurette. I will still attempt to watch it out of blind loyalty to Faris. I’ve definitely taken some shit from friends about my utter inability to watch anything with audible laughter anymore, but this will be a fucking trial.