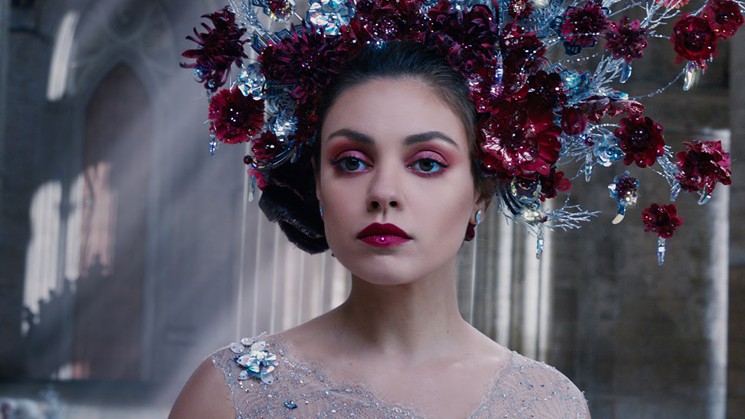 written and directed by: Andy and Lana Wachowski

MPAA: Rated PG-13 for some violence, sequences of sci-fi action, some suggestive content and partial nudity

If you were wondering, quite reasonably, how exactly Andy and Lana Wachowski were planning to make yet another cerebral sci-fi epic but cast Mila Kunis and Channing Tatum as the leads, the answer is simple: they were never going to do that. After the ponderous, endless torture of Cloud Atlas, the Wachowskis have suddenly developed a sense of humor to accent the Luc Besson-style Eurotrash action of their latest, Jupiter Ascending. Not that they’ve never displayed wit before, of course; their debut feature (and, to my mind, their finest film to this day), Bound, was sublimely witty. But wit and humor don’t necessarily overlap, and the goofy-as-fuck Jupiter Ascending is decidedly in the latter camp (emphasis on “camp”).

In what is easily one of the stranger narratives of Russian immigration ever told—and I say that as someone who’s read every book Gary Shteyngart has published—Kunis stars as the titular Jupiter Jones (yes, the film’s title is a play on her name, which vaults the film into the dubious company of such similarly hackneyed protagonist-pun classics as Poetic Justice). Having been born to her widowed mother midway through her emigration from Russia to the U.S., Jupiter grew up in an overcrowded immigrant household and currently works as a cleaning lady along with her mother and aunt (Kunis spends what feels like 10% of her screen time on her knees in front of a toilet). Hers is a thoroughly unremarkable existence…until [deep breath] three all-powerful space siblings from the House of Abrasax (a downmarket sister brand to House of Deréon) determine that she’s the reincarnated form of their space-queen mother and dispatch hunters to retrieve her and get their inheritance (or something like that).

The siblings—malevolent Balem (Eddie Redmayne), hedonistic Titus (Douglas Booth), and glamorous Kalique (Tuppence Middleton, a name to be cherished)—each want to ingratiate themselves to her for assorted self-serving reasons, many of which have to do with the inheritance, which includes Earth itself. The hunter who successfully nabs her turns out to be Caine (Tatum), on whom Jupiter develops intense romantic feelings that are revealed as abruptly as the preferred abbreviation for her ridiculous name (“Please, call me Joop” she demurs to an extraterrestrial creature after a solid hour of letting literally every other character call her Jupiter). Joop-Jo’s romance with Caine is one of the most hilariously inorganic subplots of its kind in recent memory, almost certainly shoehorned in by some meddling studio executive (“What, we’re gonna have Mila-fuckin’-Kunis and Channing-fuckin’-Tatum in the same fuckin’ movie and not have them fall in fuckin’ love? Are you having a fuckin’ stroke, you minimally talented spoiled brat?”—my impression of a studio executive).

Jupiter Ascending is arguably this year’s leading contender for the Norbit of the current Oscar race (if you recall, it was widely speculated that frontrunner Eddie Murphy lost the Best Supporting Actor Oscar for Dreamgirls several years ago because he released the noxious Norbit during the voting period). There are always a handful of Oscar contenders who show up in the abominable films of late winter and early spring, but Jupiter has the potential to be exceptionally embarrassing. After earning the best reviews of his career as broken-down ape Mark Schultz in Foxcatcher, Channing Tatum now spends an entire film yelling “Jupiter, no!” while sporting pointy prosthetic ears, frosted-blonde facial hair, and flying boots. Fresh from her breakout roles in Belle and the Oscar-nominated Beyond the Lights, the divine Gugu Mbatha-Raw is wasted here in a bit role as a galactic underling with what appear to be pig ears pinned to the sides of her head.

And then there’s actual Oscar frontrunner Eddie Redmayne, poised the most precariously for a Norbit-style crash and burn with his very misguided and over-the-top performance as the evil Balem. Playing the role in a deeply affected manner that suggests Tilda Swinton if she’d been struck by lightning and legally died for five minutes, his line readings alternate between barely audible spectral whispers and sudden queeny shrieks that evoked gales of laughter at the screening I attended. With the Best Actor category one of the only races with any real suspense this year, Michael Keaton could conceivably have Jupiter Ascending to thank for eking him out a victory.

Oscar politics aside, Jupiter Ascending is consistently paced and bizarre enough to at least be intriguing; around the halfway point, it launches into an extended comic-relief bit about space bureaucracy as if that were a real thing of which we’d all enjoy a potent satirical skewering. It’s the fun kind of bad movie, with just enough of a wink to suggest that it’s somewhat in on the joke. Joop-Jo’s journey may not be ridiculous or subversive enough to make the film emerge as a Barbarella-style cult space classic, but as effects-driven sci-fi spectacles go, you could do worse.

The Binge Review: Eight Observations About “The Hateful Eight”