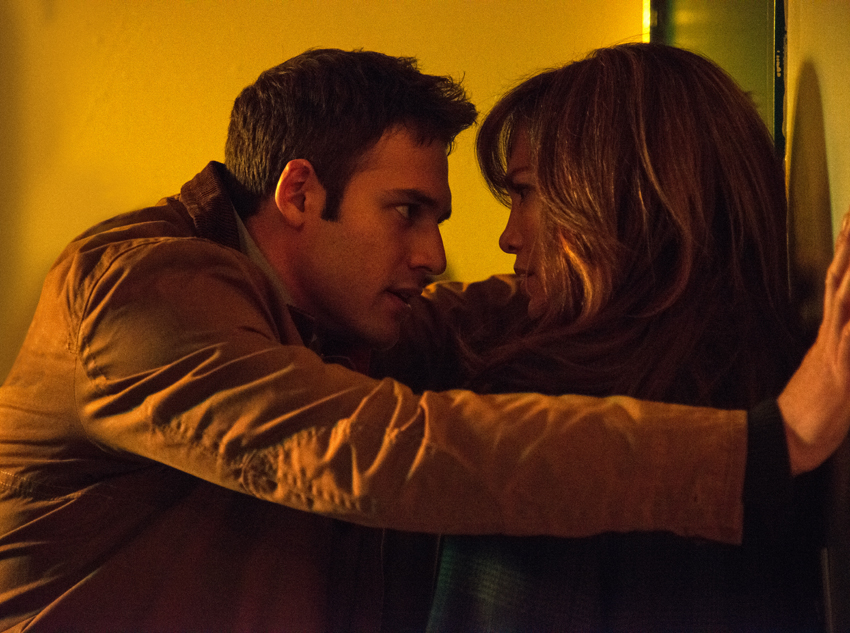 For a movie that opens with Kristin Chenoweth calling Jennifer Lopez a pussy—only to herself be called a “dried-up old cunt” a bit later (what would Glinda say?)—The Boy Next Door doesn’t provide nearly as much campy fun as one might hope. The potential is certainly there: Lopez stars as Claire Peterson, a high school “literature teacher” (a thing we definitely didn’t have at my high school) who specializes in “the classics” (again: nope). This gives us the opportunity to watch Lopez say things like “Next semester I’m teaching Homer” while sporting ass-hugging pencil skirts and sexy-teacher cardigans.

As the story begins, Claire is recovering from the bombshell that her husband Garrett (John Corbett) had an ongoing affair with a work colleague he saw on business trips to San Francisco. I personally can’t imagine any self-respecting San Franciscan sleeping with John Corbett unless it was a queer woman mistaking him for a kindly older lesbian, but I digress. Having sent Garrett packing, Claire is left to raise their teenage son Kevin (Ian Nelson) more or less on her own, with moral support in the form of obligatory wise-cracking best friend and vice-principal of her school, Vicky (Chenoweth, committing to the role by adopting choppy mid-period Gosselin hair).

Things take a turn with the introduction of Claire’s impossibly handsome new neighbor, Noah (Ryan Guzman), who literally enters the film bicep-first when he prevents a garage door from potentially flattening her precious posterior. In a hilariously fast and thorough bit of exposition, his sudden appearance is promptly explained by his infirm great-uncle, Mr. Sandborn (veteran character actor Jack Wallace, channeling Grandpa Simpson), who rolls in without missing a beat and generously fills Claire in on all of Noah’s backstory minus the psycho parts we’ll obviously find out in the third act. In summary, Noah is an orphan (surely there will be nothing suspicious about the death of his parents) who had to leave his last school (for what are surely normal reasons) and who, despite being 19 (so the imminent sex can be less creepy), has enrolled at Claire’s school to get his diploma (but surely won’t end up in her class) while he cares for his great-uncle.

Claire’s eyes immediately glaze over with “Oh hel-loooooooo” lust from the first moment she sees Noah, and she’s not the only one; Kevin is also clearly overcome with a case of the vapors, which Noah seems to invite by finding little ways to touch him from the get-go. Needless to say, I was infinitely more interested in the story of a hunky stranger seducing a lonely mother and her gangly teen son at the same time—until moments later, when the script derailed my fantasy by introducing some dumb blonde girl Kevin allegedly has a crush on, so that Noah can mentor him in the ways of poon-hounding. Lest any Hand That Rocks the Cradle-style cliches went unchecked, in this very same scene we meet a posse of inexplicably hostile skateboarders (who surely won’t meet a violent fate as a display of Noah’s loyalty) who viciously antagonize Kevin because he once peed himself while having an allergic reaction that requires him to carry some kind of enormous EpiPen (no chance this will come into play later).

One night Claire gets an eyeful of Noah’s flawless physique while lounging in her bedroom post-shower, casually clad in a nightie and fuck-me pumps (Claire, not Noah), and before you know it, they’re banging during a rainstorm. As if courting the Fifty Shades crowd, the film has Claire tell Noah “no” and “stop it” more than enough times to make it feel a bit rapey before she finally surrenders to a night of having her boobs clutched like boulders while Noah lies nude atop her (the second of three times Mr. Guzman, a veteran of the Step Up films, unveils his picture-perfect ass onscreen here; anyone hoping for more will be disappointed to learn of a torture device known as a “dick tie”). But then Claire wrecks it the next morning by really not being cool about their hookup, scorning Noah with such categorical rejection that just about anyone would’ve decided to fuck with her as payback. Further enraged by the reconciliatory reappearance of Garrett, Noah steps up the crazy and drags Claire into a game of cat-and-mouse that most definitely won’t end with someone getting a finger shoved into their eyeball.

The Boy Next Door opens in theaters today.