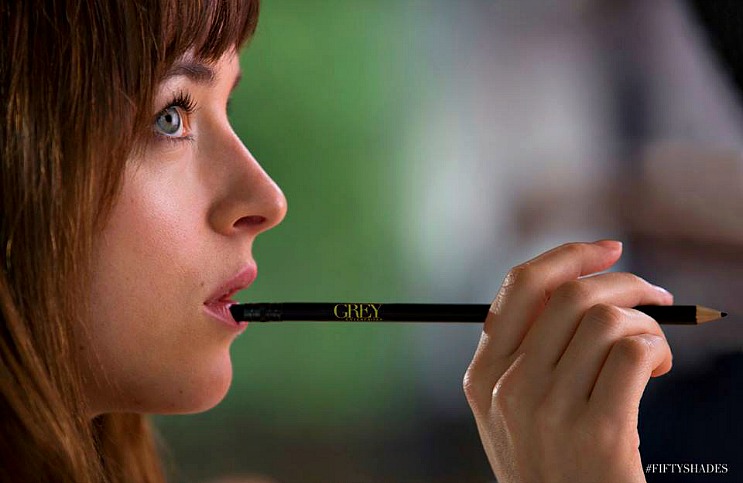 MPAA: Rated R for strong sexual content including dialogue, some unusual behavior and graphic nudity, and for language

A sorry-ass excuse for smut that still manages to work decently well despite its source material, Fifty Shades of Grey is a vital object lesson in how even the worst novel can be somewhat elevated by smart filmmaking choices. In a complete reversal of the usual plot wherein an underdog author battles valiantly against artless studio heads to protect the integrity of their work, author E L James has unquestionably emerged as the villain of this piece. Her well-documented on-set battles with director Sam Taylor-Johnson, the entitlement to which she was accorded by the unprecedented creative control granted to her by Focus Features in their Faustian deal to obtain the book rights, are already the stuff of legend. And while normally one would side with the author in their attempts to protect their work, Fifty Shades is a fairly new scenario: one in which the material must be saved from the author rather than by them.

While by no definition a great film, Fifty Shades is a damn sight better than one might have expected going into it. The kudos for this goes entirely to Taylor-Johnson and her creative team, namely cinematographer Seamus McGarvey (The Hours) and production designer/longtime Tarantino collaborator David Wasco, as well as leading lady Dakota Johnson. Following in her mother Melanie Griffith’s footsteps by giving a winning breakout turn as a modern gal in a complicated sexual relationship with a louche businessman (from Working Girl to Whipping Girl), Johnson is the film’s heart and soul, transforming a character that read insufferably on the page into a smart, self-possessed, funny protagonist.

Taylor-Johnson and company seem to understand that the only way to adapt a book written with such an abundance of clichés and laughably poor taste is to essentially make it a comedy. For its first two-thirds, Fifty Shades plays not unlike an S&M rom-com—the first of its kind since the Rosie O’Donnell classic Exit to Eden. Johnson amply displays the sitcom-ready timing she honed on the beloved but short-lived Fox comedy Ben & Kate, all priceless reaction shots and dry line readings. In its depiction of a shy young brunette who bags her dream dude only to discover he has a fetish by which she is mortified but game to try, it’s rather similar to the instant-classic pegging episode of Broad City, if not quite reaching such dizzying comic heights.

In keeping with the rom-com trope, the first act belongs to the She’s All That school of “Glasses off, she’s gorgeous!” Johnson plays Anastasia (“Ana”) Steele, a mousy English-lit student dispatched by her vivacious yet infirm roommate Kate (an appealing Eloise Mumford) to interview wealthy young business magnate Christian Grey (Jamie Dornan) in her stead. Johnson’s styling in these sequences is absurd; to quote Cady Heron’s summation of her Mathletes competitor Caroline Krafft, her outfit looks like it was picked out by a blind Sunday school teacher. When Ana arrives at Christian’s lavishly appointed business headquarters, she’s greeted by an identical fleet of chic supermodels who glide effortlessly down sleek corridors while Ana bumbles behind them. Her bumbling reaches a ridiculous nadir when she literally falls on her face as she’s stepping into Christian’s office for the first time; James wants us to think she’s just that physically graceless and out of touch with her body (she also wants Ana on her hands and knees when she first glimpses Christian), but I think one of those bitch models just tripped her.

The film continues to crank up the cheese during these early scenes between Ana and Christian: she stares at him longingly (given the shape she had to keep her body in and her well-known disdain for Dornan, I imagine Johnson followed Liz Lemon’s strategy when she had to make out with Devon Banks: “I pretended he was a sandwich”), biting her bottom lip enough times to permanently cleave it in two, repeatedly shoving a GREY-branded pencil in and around her mouth. Even in these scenes, the film knows it’s being ridiculous; Danny Elfman’s score winks at us with jaunty interludes rather than wailing sax or fuck-me trip hop beats.

Then we get on to the matter of Christian and Ana’s courtship, which is mined for yet further humor. After Christian comes out to Ana as a dominant, showing her his “playroom” (which has an entire rack of what appear to be clip-in yaki ponytails) and explaining what will be expected of her if she agrees to be “his” (terminology that will always call to mind Bill Compton barking, “Sookeh, you are-uh mine!”), the two engage in a lengthy negotiation process about what Ana is and is not willing to do, culminating in a truly hilarious and extremely effective boardroom scene that’s arguably the film’s finest moment, as well as its sexiest. Despite the fact that Ana is signing up to be Christian’s submissive, the scene serves as an amusing metaphor for the ways that women ultimately control what varieties of sex they’re willing to engage in within heterosexual relationships, since it’s taken as granted that the guy is up for all of it.

Dornan is also at his best and most beguiling in this sequence, a peak to which he rarely returns for the film’s remainder. While he seemed an intriguing (if problematic) last-minute casting choice based on his unnerving performance as a ladykiller of the more literal variety in the serial killer drama series The Fall, it now seems like perhaps that was more a confluence of great writing and grittier styling than great acting. Shaved and shellacked as Christian Grey, a benign twinkle in his eye, Dornan evinces a general flatness that fails to meet Johnson anywhere close to halfway. As Tyra Banks would say, he’s simply resting on pretty. Like Johnson, he’s burdened with a simplistic and thinly sketched character, but unlike her, he seems incapable of giving Christian any kind of inner life—essential when portraying a character whose fundamental vibe is brooding and sexily damaged.

So, there are things to be applauded about Fifty Shades of Grey (I’m as shocked are you are—believe me, I had my knives out going into this one and was hoping to give it a full pan). The film’s focus on Ana learning to receive and prioritize her own pleasure while setting and maintaining safe boundaries is to be lauded. American studio films have essentially jettisoned sex altogether over the last decade or two while onscreen violence has only grown more graphic, so it’s refreshing to see a movie concern itself so wholly with matters of sex and sexuality, especially from a female perspective.

With that said, I’m not quite sure who Fifty Shades of Grey is meant to please. Its legions of book fans embraced it for what it was: pornography. There didn’t seem to be much confusion about the draw; it certainly wasn’t the dialogue, endless internal monologues, or supporting characters. Readers unapologetically got their rocks off reading the extremely X-rated sex scenes set against a female wish-fulfillment fantasy about a nice girl who reforms a bad boy (which it shares with its inspiration, Twilight). And yet here we are with this neutered, compromised R-rated film adaptation, which has stripped away nearly all the dirtiest stuff and left us with a handful of scenes in which Johnson lies nude on a table while Dornan occasionally raps her with a riding crop as if swatting a fly. Despite Taylor-Johnson’s successes in elevating the material and Johnson’s heartfelt performance, Fifty Shades of Grey seems a thankless endeavor that’s unlikely to please anyone. Ultimately, trying to make a respectable film from a thoroughly unrespectable book is like putting lipstick on a pig (bottom).

Fifty Shades of Grey is in theaters now.