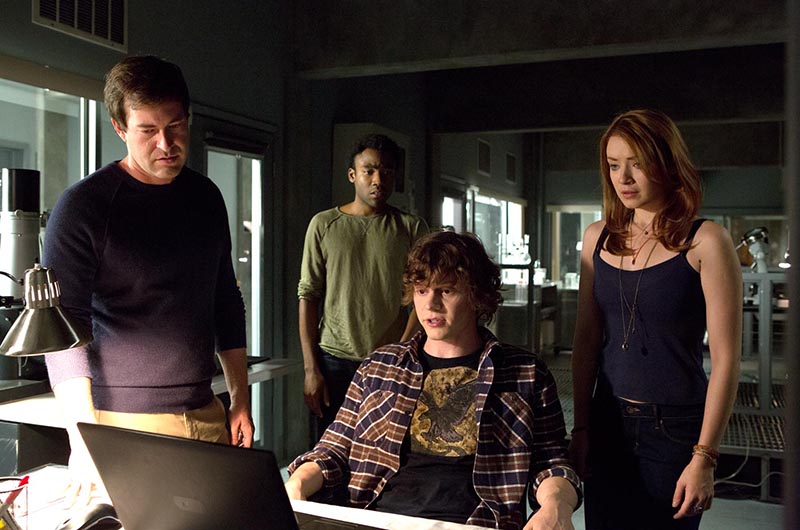 A number of questions crossed my mind while viewing The Lazarus Effect, or as I prefer to call it, Death Unbecomes Her. Questions like: What the hell is the deal with this movie? Why the shit did Mark Duplass take a break from his self-determined, never-better movie career to make this sack of crap? To whom did Donald Glover lose a bet that required him to make such an inauspicious return to acting after quitting Community to focus on music? Was it McHale? It must have been. How in the almighty fuck is this directed by David Gelb, who previously helmed the hugely acclaimed documentary Jiro Dreams of Sushi? Is this all some kind of wise-ass genre joke at the audience’s expense? Did this crew of arthouse veterans get together to intentionally Springtime for Hitler a mediocre, PG-13 horror flick with a February release? Are we being punked? Had I stayed past the credits, would the cast and crew have appeared onscreen and shouted “J/K, LOL!” If anyone stays past the credits, let me know if this happens.

A misbegotten riff on that Buffy storyline where the Scoobies pull her dead ass out of Heaven and she comes back wrong, The Lazarus Effect is about a group of medical students—engaged couple Frank (Duplass) and Zoe (Olivia Wilde), computer guy Niko (Glover), obnoxious bro-who-vapes Clay (Evan Peters), plus videographer Eva (a shrill Sarah Bolger)—who’ve developed a serum with the potential to revive dead lifeforms so doctors will have more time to work on them. After initially trying it out on a pig, the gang succeeds in resurrecting a dead golden retriever, which Frank and Zoe take home with them despite its immediately bizarre and increasingly erratic behavior (naturally, the sneaky and confidential nature of their project requires the utmost “No, we can’t let anyone find out about this!” secrecy, leaving them entirely to their own devices when the shit inevitably hits the fan).

But then [I guess this is a spoiler, but not really because it’s on the poster and in every trailer], when Zoe is accidentally electrocuted in the lab, a grief-crazed Frank crosses the line between just kinda winking at God and full-on playing Him by using their serum to reanimate her. Frank and company already knew from the golden retriever experiment that Zoe’s brain was likely to make new neural connections at an insanely rapid rate, allowing her to use more of her brain at once than the fabled standard 10% at a time. Yes, that’s right—not even a year after Lucy, we already have another movie about a woman who’s transformed into a full-brained monster when she’s implanted with some crazy chemical concoction. But whereas Lucy had a blast following its heroine as she avenged herself against her tormentors while simultaneously embarking on an unprecedented odyssey of neurobiological discovery, The Lazarus Effect just concludes that accessing more of your brainpower is the same thing as being possessed.

For its first half, The Lazarus Effect genuinely shows potential. Gelb has assembled a stellar cast, and in the film’s early scenes, their naturalistic looseness bounces off each another appealingly; Duplass and Wilde in particular, both familiar with the ways of improv filmmaking (Wilde having been recently inducted into it with Drinking Buddies), make especially affecting impressions. But then the strangest thing happens: the movie just cuts out its second act, abruptly transitioning from the end of the first act (Zoe having been resuscitated, the gang studying her, Frank contemplating what he’s done) to its immensely anticlimactic showdown finale, in which Zoe turns on a dime and just starts offing everyone (The Lazarus Effect does deserve recognition for giving cinema its first murder by vape, so: kudos). It’s really almost as if the filmmakers learned about Lucy halfway into production and were just kinda like, “Well, shit. Guess we’ll nix the philosophical contemplation and just make her a demon? Yeah? Sure.”

This would all be somewhat excusable if the film were even remotely frightening, but it just ain’t so. Gelb pulls from the usual basic-bitch bag of horror movie tricks—flickering lights, sudden blackouts, unexpected reflections, that thing where the camera follows a character’s gaze as they look toward a noise, then pans back to reveal someone behind them. What should we call that? The “gotcha”? Only if it could be accompanied by the Joan Callamezzo “Gotcha!” Dancers (#RIPParksAndRec). And speaking of gotcha moments, the movie surprises us with the revelation that there’s actually a really boring way to show someone getting an adrenaline shot slammed into their heart. Where’s Vincent Vega and Mia Wallace when you need them?

The Lazarus Effect traffics in other cliches as well (spoiler alert—the black guy dies first, if you don’t count Zoe and the dog), including one of the sonic variety: in a bizarre subplot that suggests there was once much more to this script, Zoe is haunted by nightmares of her apartment building burning down when she was a child, a recurring dream sequence which is utterly sunk by its brazen use of the most well-known “screaming woman” sound effect in the universe. You’ll know the one I mean when you hear it. This is especially ironic given that Duplass is currently starring as a fastidious sound engineer in the superb HBO series Togetherness. One can’t help but picture his character slumping down in his seat at such an unabashed display of laziness. When The Lazarus Effect is about ideas, exploration, and then grief, it at least has a certain gravity to it. But after the slapdash switcheroo it pulls in the middle, it just sinks right back into its grave.