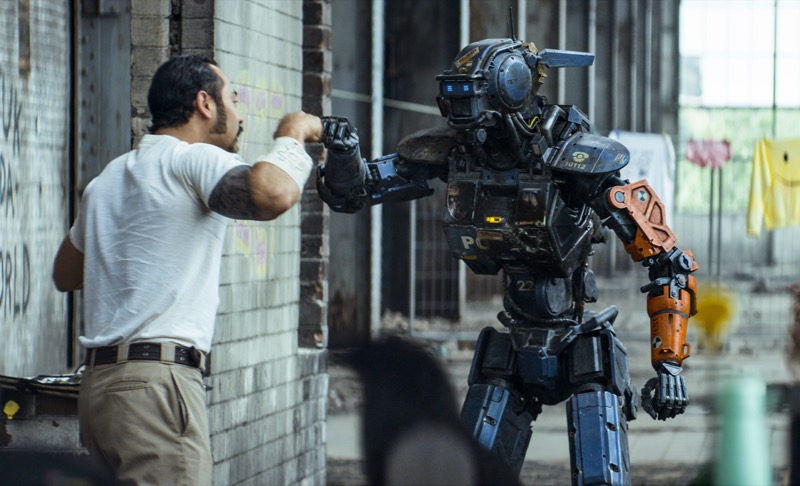 Sweet lord, where to start with this one? Set in a dystopian Johannesburg where violence and robberies are rivaled only by hairstyles for the greatest overall threat to public welfare, Neill Blomkamp’s Chappie is the story of engineer Deon (Dev Patel), who designs a superior form of artificial intelligence that will endow robots with human consciousness. He decides to test it out on a seriously damaged police droid. Let me back up: there are police droids. That’s another thing that Deon invented. Don’t let his boyish smile fool you—Deon is a geyser of transformational ideas. This is threatening to villainous Vincent (Hugh Jackman), a fellow engineer at the Lab for Innovations in Police Robot Technology or wherever the fuck it is that they work together, where they’re both overseen by the fearsomely named Michelle (Sigourney Weaver).

As a former soldier, Vincent believes all police robot technology should be driven by the brain signals of an actual human vis a vis one of those helmets from Lawnmower Man or Existenz. But he’s a dumb dummy with dumb-dummy ideas who walks around dressed like he’s about to lead the world’s most embarrassing safari while sporting a gentle half-mullet (the Kentucky faucet rather than the full-on waterfall), so no one cares what he has to say. Deon’s the idea guy here.

Unfortunately, Deon’s ideas stop decidedly short of security, because he and his broken droid are soon kidnapped by literally the world’s dumbest criminals, whom we’re to believe are seriously the first people in all of crime-ridden South Africa to have the idea of capturing a droid and making Deon reprogram it as a baddie. These criminals are named Ninja and Yolandi. They are also played by people named Ninja and Yolandi, a.k.a South African rap-rave group Die Antwoord. And really, I could just stop the review there. The appearance of these two goons are when any hopes that Chappie might have been a return to form for Blomkamp, who followed the brilliant District 9 with the unremarkable Elysium, go up in flames. Shut it down, guys. Shut the whole thing down.

I cannot overstate how incredibly embarrassing it is watching these two onscreen, looking like a Harmony Korine wet-dream hybrid of Gummo‘s jarring ugliness with Spring Breakers‘ white thug posturing. And then, to make matters even worse, when Deon’s broken droid is successfully rebooted and implanted with human consciousness—effectively rendering it a vulnerable baby—Ninja and Yolandi become his parents, naming him Chappie and raising him in their own distinct ways (Yolandi nurtures him while Ninja teaches him how to be “#1 gangsta” so he’ll assist with a heist). Meanwhile, Deon repeatedly tries worming his way back in like a pushy surrogate, attempting to be a good influence and help Chappie realize his more high-minded potential (“Nurture your creativity, Chappie!” is a thing Dev Patel has to say.)

Maybe, like me, you heard Chappie was about a robot police force in South Africa and assumed it would be a parable about totalitarianism, police oppression and brutality, government overreach, etc. But nope—in its ramshackle oven full of half-baked ideas, the one that comes closest to coherence is merely a parenting allegory about nature vs. nurture. All of these provocative, explosive signifiers are in the service of what’s essentially an appeal to think about the children, as well as a lackluster attempt at contemplating the idea of consciousness itself. This should work, but oh, how it doesn’t. Die Antwoord make sure of that, in addition to Sharlto Copley’s crazed, manic motion-capture acting and the near-lethal cringes induced by his attempts at appropriating Ninja’s appropriation of American rap culture. When Ninja teaches Chappie how to pimp-strut, we all die a little. This happened on our watch, guys.

While overall it feels like a cautionary tale about the pitfalls of self-serious, unchecked, presumably substance-induced creativity, I’ll say this for Chappie: it isn’t boring. Rather, like Showgirls and other great terrible movies, it seems to find genuinely new ways to be bad at every turn. I spent entire scenes robotically shaking my head from side to side with my mouth hanging open like the animatronic drummer in a Chuck E. Cheese band. This is far more than I can say for all the other terrible movies I’ve reviewed so far this year. Chappie will be remembered as a curious and largely dubious footnote of the year in cinema, but at least it will be remembered.