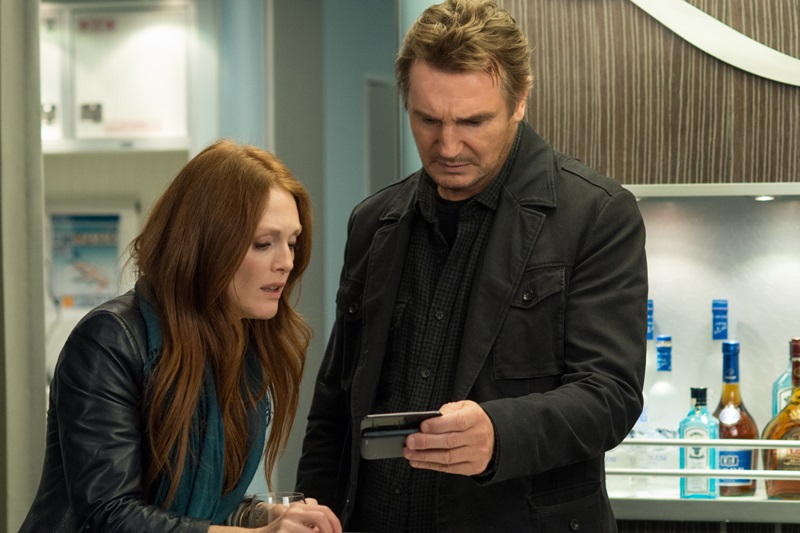 MPAA: Rated PG-13 for intense sequences of action and violence, some language, sensuality and drug references

Imagine Robert Zemeckis’ Flight as a post-9/11 Agatha Christie whodunit and you’ll have something resembling the deliriously ludicrous but unfailingly entertaining Non-Stop, the latest commendable B-movie from one of the emerging leaders of the genre, Jaume Collet-Serra (House of Wax, Orphan, Unknown). As with his earlier work, Collet-Serra has drawn an auspicious cast to decidedly inauspicious material, but through his sheer conviction as a genre filmmaker—and his consistent ability to wink at his audience through all the ridiculousness—he’s once again managed to pull it off.

Back for more after playing the lead in Unknown, Liam Neeson gamely grimaces his way through his performance as Bill Marks, a down-and-out federal Air Marshal. The film lays it on a bit thick with the down-and-outness: the first time we see Bill, he’s sitting in an airport parking lot chugging booze. He then comes perilously close to turning into a Ke$ha lyric by dipping his toothbrush into a mug of bourbon (but not a bottle of Jack, because he is a grown-up). Sufficiently drunk, Bill staggers through the airport and boards his plane, where his Air Marshal-ness is of course intended to be covert (thus validating the suspicions of Melissa McCarthy’s character in Bridesmaids; I can neither confirm nor deny if Neeson was hiding a gun in his ass).

The transatlantic flight begins with little fanfare. Fortunately for Bill, he finds himself seated not next to McCarthy but rather Jen Summers (Julianne Moore), a chatty, self-possessed, age-appropriate woman with whom Bill strikes up a charming friendship. But before this can turn into Up in the Air 2: Cruise Control, Bill begins receiving a series of threatening text messages over what is apparently a secret wireless network only accessible to Air Marshals. The texter tells Bill that if he doesn’t wire them $150 million, one person will die on the plane every 20 minutes. At first this seems preposterous—how on earth could you discreetly kill a person in a space as confined as an airplane? And yet, when the first 20 minutes are up, someone on the plane has died. And then another person 20 minutes after that. And then another.

Bill, who now finds himself in the ultimate nightmare situation of anyone who ever had a few drinks and then decided to go back to work, must get his wits about him and begin brainstorming ways to flush out the texter. In an annoying if inevitable convention, Bill’s text chats play out as pop-ups on the screen; making matters worse, Bill has what is evidently the world’s only inerrant autocorrect, which only ever guesses the right word as he’s typing. It would have been much more enjoyable (and realistic) if we got to watch Bill groan after accidentally texting, “WHAT THE HE’LL DO YOU WANT?” But, as I said, this is a ludicrous movie.

Onscreen texting nuisances aside, Non-Stop gets one hell of a good guessing game going for itself during these sequences. The audience finds itself playing the oh-so-familiar Law & Order-style game of “Which of these too-credible actors cast in an ostensibly insignificant role is the culprit?” Is it Moore? Is it Michelle “Lady Mary” Dockery as a flight attendant? Lupita Nyong’o as her second-in-command? Corey Stoll as a pissed-off NYPD cop? The plane is literally full of potential suspects, and with no clear alternative presenting itself in his booze-addled brain, Bill gradually imposes a police state on the aircraft as he vigorously works to unmask the terrorist.

And here’s where Non-Stop begins to show its hand in terms of what it’s really about. The plot plays out like a microcosmic allegory about the thankless life of law enforcement officials. We watch as an Air Marshal receives a threat, sees that threat become credible as it comes true, and then make a series of judgment calls which don’t earn him many friends aboard the plane. As Bill repeatedly storms up and down the aisles, demanding that the lights be turned on and that the passengers submit to being searched, they inevitably start asking what’s going on. Of course Bill doesn’t want to tell them the extent of it, so he continues focusing on the task at hand. This turns the passengers bitchy and, eventually, irate. So now we see Bill “just trying to do his job” while the civilians are making his life a living hell, becoming decreasingly complicit with his demands for their cooperation. The film shows especially poor taste by including a token Mouthy Black Guy, seated in coach, who is so aggressively uncooperative that Bill must rough him up in what feels like a moment the audience is intended to cheer for.

Then, in a truly hilarious twist, Bill must weather a full-fledged real-time media attack! You see, one of the civilians used his camera phone (the enemy of law enforcement) to film Bill’s rough antics, and apparently had a strong enough Gogo inflight wi-fi connection that he was able to upload it to YouTube (ludicrous movie). And so, in addition to everything else Bill is juggling while attempting to deal with an anonymous terrorist and a mounting body count, he also has to deal with the media getting bent out of shape about his police brutality and spotty personal history. “Just let the guy work!” the film wants us to say. “He’s trying to save your lives!” It’s enough to make you wonder if the film wasn’t actually underwritten by the TSA, the Department of Homeland Security, and of course, the NYPD. Stoll does play a member of their ranks, after all. Maybe it was their perk for outbidding the LAPD on Kickstarter.

The distractingly prestigious cast may be slumming it, but they at least ensure that there’s never an off-moment with the performances. Neeson could do this kind of role in his sleep by now, but for a 61-year-old man, he still makes for one hell of an action hero. Moore brings a surprising amount of personality to a role that probably barely existed on the page; she’s saddled with a tacked-on backstory that I assume was a result of her casting (“Shit, we gotta beef this up!”), but she nails the monologue it provides her. Dockery is as unfailingly porcelain-poised as a lowly flight attendant as she is on Downton Abbey, and remains an engaging screen presence. Stoll (House of Cards) once again proves himself to be one of the most exciting breakout character actors on the scene; who’s gonna give this guy the leading role that will turn him into a full-on star? And in what will hopefully be her only throwaway role, Nyong’o (12 Years a Slave) plays a near-wordless second fiddle to Dockery while quietly upstaging her with Grace Jones realness, in a hi-top fade and a stewardess dress that appears to have been reconstructed out of Eddie Murphy’s Raw ensemble.

As for the villain reveal—let’s talk after you see the movie, because seriously?