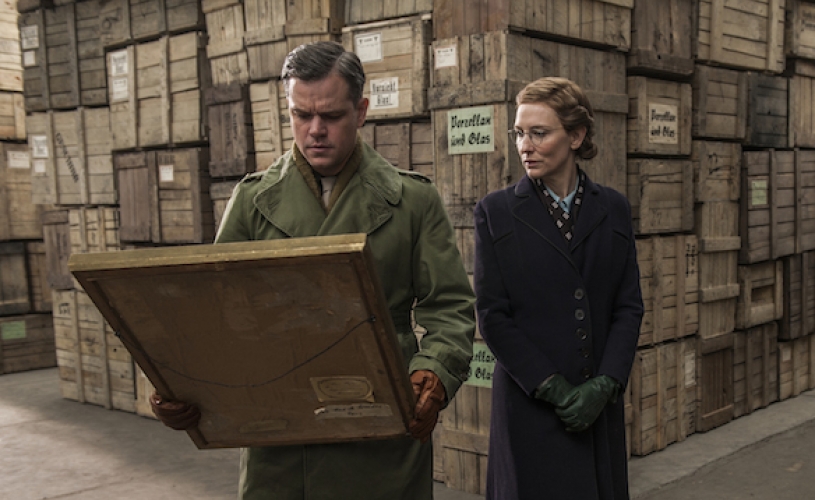 I’ve long held the belief that movies about finding, stealing, or otherwise physically engaging with artwork in any way other than creating it are just the dullest of the dull. The Monuments Men, George Clooney’s latest old-fashioned, civic-minded history lesson, does nothing to challenge this prejudice. If anything, it strengthens it. Originally intended as an Oscar-season prestige movie before having its release date embarrassingly switched to February once the studio realized what it was working with, The Monuments Men has little to commend it above its fellow winter box office tripe other than its utterly wasted A-list cast and pedigree. It is the Gangster Squad of 2014.

The plot, per studio summary:

Based on the true story of the greatest treasure hunt in history, The Monuments Men is an action drama focusing on an unlikely World War II platoon, tasked by FDR with going into Germany to rescue artistic masterpieces from Nazi thieves and returning them to their rightful owners. It would be an impossible mission: with the art trapped behind enemy lines, and with the German army under orders to destroy everything as the Reich fell, how could these guys – seven museum directors, curators, and art historians, all more familiar with Michelangelo than the M-1 – possibly hope to succeed? But as the Monuments Men, as they were called, found themselves in a race against time to avoid the destruction of 1000 years of culture, they would risk their lives to protect and defend mankind’s greatest achievements.

So it’s basically an Ocean’s movie set in WWII or, if you will, Saving Private Rodin; it even depicts our aged, ungainly crew of heroic art nerds timidly storming the beach at Normandy, albeit when it is empty (the majority of the film takes place in the war’s final year). That shot is the last time in this film you’ll be reminded of Saving Private Ryan. Clooney’s quaint, upbeat yarn is about as far from the war-is-hell grit of Spielberg’s vision as could be imagined. Every potentially dark moment is smoothed over by Alexandre Desplat’s grandiose score or a soothing Clooney voiceover; one especially maudlin sequence uses an amateur recording of “Have Yourself a Merry Little Christmas” that only serves to remind the audience when this movie was first meant to be released.

Its handful of tense scenarios almost always have comedic resolutions: a seemingly lethal sniper is revealed to be an errant child, while a feral-eyed German soldier’s murderous rage is diffused by the offer of a cigarette from Bill Murray (whose wouldn’t be?). Even when members of the platoon perish—which does actually happen, and in a suspiciously one-sided manner regarding the characters’ nationalities—the film takes it overwhelmingly in stride, as if these men were merely beamed to the great emeritus art faculty lounge in the sky rather than brutally shot to death.

It is clear from the outset that Clooney is paying homage to the benign, adventure-flavored war movies of the ’40s and ’50s, from his unhurried pace to the classicist structure of his screenplay (co-written with Grant Heslov and adapted from Robert M. Edsel’s book). And while I enjoyed how Clooney’s refusal to engage in traditional action-movie clichés consistently thwarted the gentleman behind me, who repeatedly and wrongly asserted his belief that something was about to blow up—a horse runs across a field (“BOOM! Oh…”), a man enters a cave (“BOOBY TRAP! Oh…”)—it still would have been nice if something compelling had actually happened at, you know, some point in the movie.

For his impressive cast, Clooney has gamely convinced a batch of the world’s finest actors to don unflattering ’40s military pants that automatically add 50 pounds to your ass (or, in Cate Blanchett’s case, styled her like a stern closeted-lesbian librarian and forced her to wear what appear to be orthopedic shoes). For his work onscreen, Clooney phones in his usual charm and confidence, and gives himself enough scenes with his Ocean’s buddy Matt Damon that we may again bask in the privilege of watching these two masc, chill bros smirk at each other. Jean Dujardin, the Clooney of France, shows up to flash that knee-buckling Gallic smile, and Hugh Bonneville’s character does a richly-deserved penance for being such a dick on Downton Abbey.

John Goodman predictably gives the film’s finest performance by a long shot, while Bill Murray and Bob Balaban appear to be acting out some dryly mirthful New Yorker humor piece in the backdrop. As for Blanchett, the film cruelly strips her character of the power commanded by her invaluable expertise by forcing her to make a desperate pass at Damon, who politely refuses her advances because he is married and is in a movie with zero interest in ambiguity. When she becomes fodder for a bro joke between Damon and Clooney later, it is utterly humiliating. Thank God this didn’t come out during awards season; La Blanchett already has enough to contend with on the Oscar trail. By which I mean losing her Best Dressed title to Lupita Nyong’o, of course. What else would I be talking about? Moving on.

Clooney has the best of intentions here, and certainly makes his case (usually in as many words) that the value of art is great enough to merit the loss of human life, as art represents millennia of human achievement and must be preserved at all costs. However, there’s something a bit pompous about a piece of art devoted to the value of art and the martyrdom of those who understand this value enough to sacrifice their lives for it. Given what was at stake in WWII—the eternally harrowing knowledge of the millions and millions of human lives senselessly and horrifically lost—it’s hard to fully embrace Clooney’s lionization of this doddering collection of museum curators as forgotten war heroes.

Had he committed to a humorous and more satirical take, reveling in the absurdity of a pack of out-of-shape, middle-aged geeks scurrying into war zones to abscond with a painting or a bust of the Madonna (a word that hasn’t been said this many times in a movie since Truth or Dare), the film could have been a delight. But alas, Clooney’s sense of reverence prevents it from succeeding. If there comes a time during some future world war in which film scholars are putting their lives in danger to save film prints, let’s just hope no one sacrifices themselves for The Monuments Men. Talk about a senseless loss.

Film Reviews: Tomorrowland / I’ll See You in My Dreams