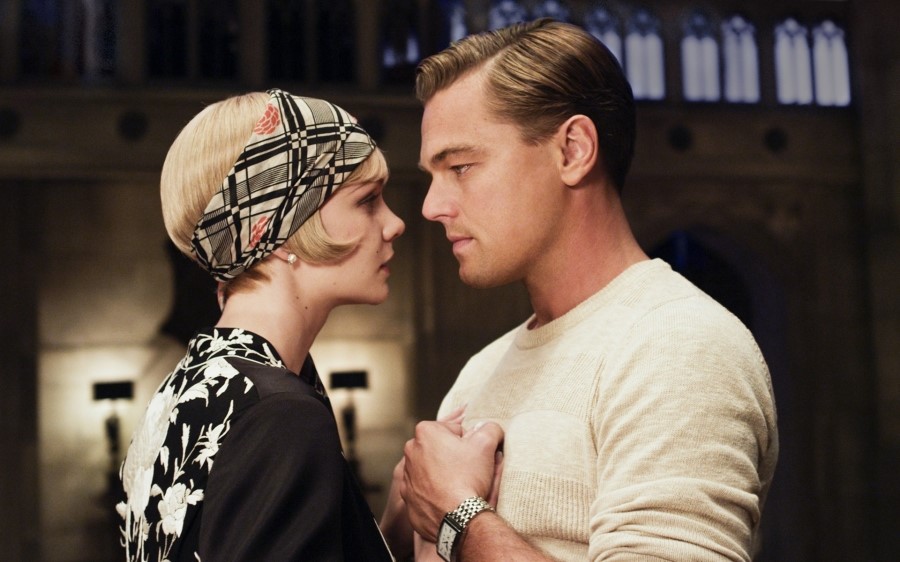 After his passion-project misfire Australia, the extravagant Aussie auteur/one-hit wonder Baz Luhrmann is firmly back in his wheelhouse of visually spectacular doomed romances with anachronistic musical cues in The Great Gatsby. Luhrmann’s treatment of this classic American text is close enough to his Romeo + Juliet and Moulin Rouge to suggest the third installment of a trilogy: each is a tragic love story told in flashback after some opening premonition of the sadness to come, giving us our star-crossed lovers against a backdrop of raging parties and general debauchery. And each is unmistakably Luhrmannesque in stylization: eye-popping colors and costumes, lightning-quick cuts, loads of audacious musical choices. And while Gatsby may represent the culmination of these earlier films from a technical perspective, it is simultaneously the most refined yet also the most muted we’ve seen from Luhrmann. Its similarities to R+J and Moulin are far too strong not to invite comparisons, from which it emerges looking a bit like the bore of the bunch.

As with Moulin, The Great Gatsby opens with a disheveled, sad-eyed drunk preparing to commemorate the tale of love and loss he’s just survived by writing it down. That man is Nick Carraway (Tobey Maguire), and unlike the leads in Luhrmann’s previous films, he is not one of our lovers. Rather, Nick is a lover of our lovers; he is the cousin of midwestern debutante Daisy Buchanan (Carey Mulligan), who is herself the beloved of enigmatic party-boy magnate Jay Gatsby (Leonardo DiCaprio). Daisy and Gatsby want to be together, and as he plays middle-man between them, Nick falls in love with the idea of their love. Except of course it’s not that easy: Daisy is married to the brutish Tom (Joel Edgerton), and even though their marriage is loveless and Tom has a mistress (ever-delightful Isla Fisher, suggesting Betty Boop as played by Madeline Kahn), that doesn’t mean he has any intention of letting Daisy go.

While F. Scott Fitzgerald’s The Great Gatsby is commonly lumped in with the canon of books everyone had to read in high school, it didn’t quite make the reading list at my own (but we still had to read the fucking Scarlet Letter). And despite the fact that I have a Bachelors in English from an accredited institution (no matter what Buzzfeed says about Kent State), I have never read it. So, having also avoided the much-criticized ’70s film adaptation starring Robert Redford and Mia Farrow, this was actually my first encounter with the story. And having now seen it, I can certainly understand why it’s so popular on high school reading lists. It’s not terribly dense or profound; it certainly seems like the kind of text that would resonate with young teens learning how to read literature for the first time. Its ideas and symbolism are simple to grasp and play with, its themes easy to name (class! identity! society!), and it lends itself to a very basic historical contextualization. Teachers today would be able to draw a neat, clean line from Jay Gatsby to another iconic self-made man who represents a different postwar chapter of the twentieth century: Don Draper.

And since major films rarely strive for denseness or complexity, it also serves Luhrmann’s dramatic purposes quite handily. His two male leads, former Pussy Posse cohorts Maguire and DiCaprio, each do subtle variations on their established archetypes: Maguire as the boyishly sensitive wide-eyed observer, and DiCaprio as the emotionally volcanic ill-fated romantic. Both are fine in their roles, although this is most certainly not DiCaprio’s long-awaited Oscar moment (if one were to edit a supercut of all the times he says “old sport” in this film, it would be nearly as long as the film itself – drinking game alert!). As Daisy, Mulligan gives the film’s most layered performance. Watching her, you are never quite sure who Daisy truly is, which is arguably the point in the end; sometimes it seems there are roiling deeps beneath her dimpled porcelain facade, while at others she is merely the sum of her pretensions. And in the supporting role of Daisy’s friend Jordan, Australian newcomer Elizabeth Debecki nearly steals every scene she’s in purely by the power of screen presence. The role is a throwaway without much dialogue, but Debecki (styled to resemble a long-limbed flapper combination of Rooney Mara and Lizzy Caplan) exudes so much self-assured confidence and wit that your eye goes to her immediately.

While it has elements in common with all of Luhrmann’s earlier films, The Great Gatsby is structurally the most similar to Moulin Rouge (although its final shot of DiCaprio is reminiscent of his last moment in another doomed romance). Nick is our stand-in for Christian, the sensitive outsider who gets a crash course in a new world and falls dangerously in love with it; Daisy is our Satine, the glittering leading lady whose loyalties are sometimes uncertain; and most utterly, Tom is our Duke, full of buffoonish rage and resentment. Clandestine meetings occur, wildly disparate music is played (one scene of note portrays a car full of jazz age African-Americans dancing to Jay-Z’s “Izzo (H.O.V.A.)” accompanied by strains of Gershwin), and in the end we have a man rushing in with a gun. But of the two, Moulin Rouge will stand as the more significant achievement. It was a film of such startling audacity and nerve, such eye-melting exuberance, that it was its own gay little revolution. It was positively exploding with theatrical, bleeding-heart passion. And perhaps appropriately for its Long Island locale, Luhrmann’s The Great Gatsby just feels mild-mannered and WASPish in comparison.