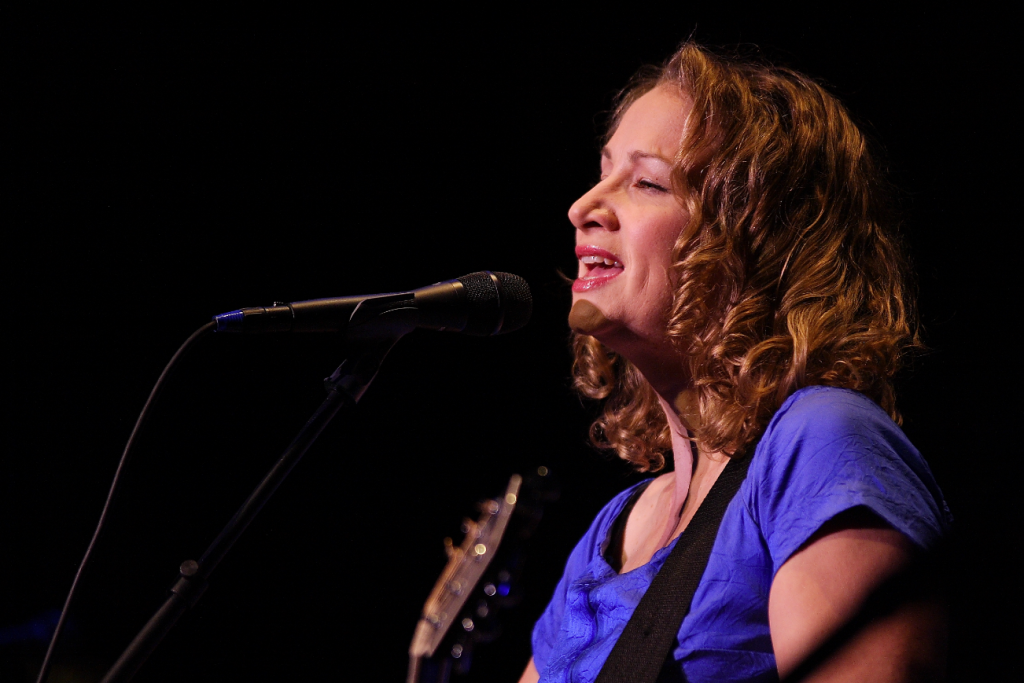 In the eighteen years since becoming a household name for her ubiquitous 1995 hit “One of Us” and accompanying triple-platinum debut LP, Relish, Joan Osborne has toured in a variety of live iterations. When playing her own solo material, Osborne’s roof-shaking blues vocals are typically accompanied by a full band; she’s also toured as a featured vocalist for acts ranging from Motown sidemen The Funk Brothers (to support her appearance in the acclaimed documentary Standing in the Shadows of Motown), to the Dixie Chicks, to the Grateful Dead and Phil Lesh & Friends. But last night at Yoshi’s San Francisco, Joan Osborne tried something relatively new in her illustrious career: a stripped-down acoustic set accompanied by just a single musician, pianist/keyboardist Keith Cotton. The result: goosebumps! And I ain’t talking about R.L. Stine.

Osborne and Cotton took the stage shortly after 8, opening with a previously unrecorded track that allowed Osborne an opportunity to gradually warm up that magnificently growling purr of hers. Cotton alternated between a big beautiful Steinway piano and a keyboard, while Osborne, clad in a black t-shirt embroidered with golden wings worn over a striped button-down, a pinstripe pleated skirt, and black boots, sporadically accompanied herself with an acoustic guitar. After the opening selection, Osborne immediately dove into one of her most iconic favorites, Relish single “St. Teresa.” As would prove to be the case for the full repertoire of the evening, it sounded gorgeously intimate in its newly stripped-down arrangement. Osborne took it easy with the song’s raspily pleading bridge (“Tell me, tell me, tell me, TE-E-E-ELL MEEEEE!”), but her soaring alternate reading was captivating.

Next she revisited “Brokedown Palace,” the Grateful Dead cover she recorded for her 2006 album Pretty Little Stranger, although she noted that she was never able to perform it while touring as the Dead’s vocalist. She then performed another new song that she teased would appear on her upcoming album, tentatively titled Love and Hate; Osborne said it would cover the full spectrum of the romantic experience, from the euphoric highs to the agonizing lows; this new song, leaning toward the former, was about seduction, a mood Osborne has always been naturally gifted at conveying. In addition to Cotton, Osborne also accompanied herself with a drum machine track from her iPhone, which she explained she’d created with a $4.99 app called FunkBox. When greeted with resounding cheers and applause after she’d finished, Osborne asked if the applause had been for the song or for the fact that she’d accompanied herself with an iPhone. “Both!” replied the audience.

She followed that with two songs from her latest studio album, Bring It On Home, which was nominated for a Grammy for Best Blues Album this year, losing out to Dr. John. (“You can’t really be mad about that,” Osborne said. “I mean, Dr. John should have a Grammy. It’s only right.”) First she played “Game of Love,” a song Ike Turner wrote for Tina Turner (the words “Ike Turner” evoked noises of disapproval in the audience, perhaps weary that just the energy from saying his name would mingle with any lasting negativity from Michelle Shocked’s infamous homophobic flameout in this very venue a few months back and combust into some kind of violent, hateful catastrophe). But nope, just a simmering, slyly defiant performance from a song that, as Osborne points out in the Bring It On Home liner notes, is ironic as such a feminist anthem considering its author. She then performed Otis Redding’s languidly romantic “Champagne and Wine.”

Perhaps emboldened by the setting (“I haven’t really played in a jazz club before and don’t think of myself as a jazz singer,” she explained), Osborne and Cotton then busted into a loose, jamming rendition of the Relish favorite “Spiderweb.” This is a jam moment in any Osborne set, but Cotton’s keyboard riffs took it in a much more jazz-improv direction (Osborne repeatedly gave credit to him throughout the 90-minute set). And then, the triumph of the evening, for Osborne as well as the audience: someone yelled out for “Righteous Love,” the title track of Osborne’s fantastic sophomore LP (her finest moment, in my estimation). This was one of many requests throughout the evening, but for some reason Osborne actually paused to consider it. Several other audience members (including yours truly) seized on this moment of pause to plus-one the request, and soon Osborne and Cotton agreed to give it a go despite not having practiced it (“You’re a very forgiving audience,” she said). This is my favorite Joan song and it was missing from her setlist the last two times I’ve seen her, so this moment was pure bliss for me. Stripped of the blaring electric guitar that instantly floods the ears on the studio version, “Righteous Love” sounded as sweetly hopeful and gorgeously melodic as an old Darlene Love song.

After that watershed moment, Osborne performed a number of great personal significane to her: Billie Holiday’s “God Bless the Child,” which she explained was the first song she’d ever performed on stage at an open mic night in Manhattan, which led to being invited back and, eventually, all that has followed. She followed it with the other most significant song in her career, “One of Us,” in an understated arrangement with some lovely vocalizing; after all these years, Osborne still sings it like she means it. Also, true confession: this is the first time I realized the lyric in the chorus is, “Just a stranger on the bus.” Seriously! I always thought it was, “Just a stranger one of us.” That’s how slow I am. Eighteen years after first hearing the song, I finally realized that God is “…just trying to make his way home” because He’s on the bus. The more you know!

For their final selection of the evening, Osborne and Cotton broke into the funkiest jam of the night with their dependably show-stopping cover of Dave Mason’s “Only You Know and I Know” from Osborne’s first collection of covers, How Sweet It Is (2002). And finally-finally, for their encore, they performed a churning, deeply felt rendition of Bill Withers’ “Ain’t No Sunshine.” All told, it was a remarkable evening showcasing Osborne’s versatility as both a dynamic singer/songwriter and a sensational song interpreter, in an intimate acoustic setting that allowed her vocals (and Cotton’s ample accompaniment skills) to fully, thrillingly bloom.