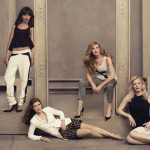 If you’re anything like me, great actresses make your world go around and there’s nothing more exciting than seeing a bunch of them come together at the same time. Well then, hallelujah for The Hollywood Reporter, because they’ve released the full-length video of their recent TV drama actresses roundtable. It features three actresses whose shows I watch and love—Connie Britton of Nashville, Elisabeth Moss of Mad Men, Anna Gunn of Breaking Bad—and three actresses whom I enjoy despite not watching their shows—Kerry Washington of Scandal, Monica Potter of Parenthood, and Kata Mara of House of Cards. I just realized that the last time Britton and Mara were in a room together, it was probably when Mara was trying to kill her on American Horror Story. Sisterhood!