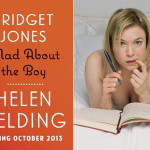 Looks like Arrested Development won’t be the only genius comedic creation to return this year after a lengthy absence. While it’s been reported for a while that Helen Fielding was working on a third Bridget Jones novel, that book now has an official title—Bridget Jones: Mad About the Boy—and an official release date of October 15. Which “boy” is Bridget mad about? Daniel? Mark? Someone new? A son? Fielding’s publisher, Knopf, said she “raised one eyebrow enigmatically” when asked to comment. However, they did provide the following details:

The novel is set in present-day London; Bridget is older; she is still keeping a diary, but she is also immersed in texting and experimenting with social media, with an accent on ‘social.’

This won’t surprise Fielding’s Twitter fans, who know she’s been tweeting under separate Bridget, Daniel, and Mark accounts for over a year (presumably as part of the research for the social media aspects of her book). Knopf also gifted us with the first official excerpt from Mad About the Boy:

You see, this is the trouble with the modern world. If it was the days of letter-writing, I would never even have started to find his address, a pen, a piece of paper, an envelope, a stamp, and gone outside at 11.30 p.m. to find a postbox. A text is gone at the brush of a fingertip, like a nuclear bomb or exocet missile.

DATING RULE NO:1
DO NOT TEXT WHEN DRUNK