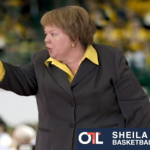 Melissa McCarthy returned to Saturday Night Live last night for her second hosting appearance, delivering the funniest episode so far this season with the sheer gusto of her performance. Whenever she was on screen, it was laughing time. She was even amusing in the weakest sketch of the night (“Incompetent Game Show Letter-Turner”). And while I get uncomfortable when McCarthy’s body size becomes part of the joke as it did during “Leftover Pizza Eater,” she transcended the potentially offensive and cheap setup with her unrelenting comic energy. The “Peter Drunklage” bit on Weekend Update was certainly a delightful surprise, but I have to give the Sketch of the Week prize to “Outside the Lines,” in which McCarthy played a physically and verbally abusive women’s basketball coach. This character totally deserves her own movie.