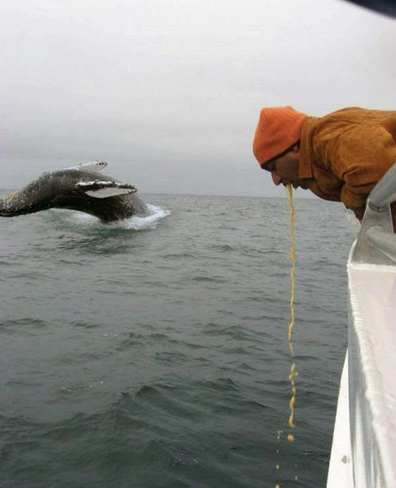 This post originally appeared on The Sassmouth Chronicles on November 27, 2009.

This photo neatly summarizes my day, except our whales weren’t as outgoing.

This morning, Scott and I met up with Judi, Sarah Jo, Simon, Ellie, and a handful of other folks (along with twenty or so other passengers) at Pier 39 to go whale watching. Despite the early meeting time (7:30) and a rainy weather forecast combined with a high surf advisory, we were all terribly excited. We basically approached it as though we’d be spending the day sunning at Dolores Park, except on a boat and with whales. Everyone came with plenty of food, snacks, and booze. It was Black Friday, and we were having a blowout sale on fun!

Fast forward about an hour. Every rail on the boat is splattered with vomit. The bathroom is a biohazard. Everywhere you look, at least one person is throwing up in a bucket or into the ocean. The boat continues pressing onward into the violent waves, repeatedly being thrown up into the air before landing heavily in the wave’s aftermath. Over. And over. And over. And over.

At least half the boat’s passengers have been transformed into clammy, pale-faced zombies, clinging desperately to whatever is nailed down, willing death to come quickly. I honestly don’t remember the last time I vomited, but it happened today. And it sucked. All I could think was, “I shouldn’t have drank that McDonald’s orange juice this morning.” Or, more accurately, “ORANGE JUICE!?!?”

Finally, after several hours of sheer relentless torture, we reached the “marine sanctuary” near the Farallon Islands. At the moment, I was laying on my back on a bench, shutting my eyes to the horror of it all. Suddenly the captain started screaming crazily about a “spout at twelve o’clock.” I mustered every ounce of strength in my weakened body and crawled with my mortally ill shipmates to the front of ship. I would have given anything to stay where I was, but if I missed this, then the entire trip would have been in vain. I was fully expecting that we wouldn’t even see a whale, so this was a pleasant surprise.

I reached the front of the ship, where a school of dolphins had worked even the sickest of us into a giddy, hand-clapping frenzy. This part was admittedly very cool, although I wasn’t able to actually look down into the water on account of my extreme nausea, so I just saw the dolphins whenever they’d leap out of the water as if escaped from Sea World. I would have loved to see them more, but I didn’t want to vomit on one of them, clogging its blowhole with my bile and killing it. You don’t come back from that.

Then, more blowing (ha). Several spouts went off in the distance. The hyperventilating naturalist informed us that there were three blue whales in the distance. “Okay,” I thought. “So, let’s get closer!” But we didn’t. We watched them respectfully from a distance. A few more spouts went off. A dorsal fin or two was spotted. And then the show was over. I returned to my spot on the bench and slipped into a deep, teeth-rattling chill for the remainder of the trip. I was drenched from the waist down, and hoping to just pass out from the cold until we pulled back into Pier 39 and someone revived me with a bucket of hot water.

Now I am happily back in my apartment, swaddled in sweat clothes, with the heat cranked as high as it goes. Sensation is gradually returning to my fingers. And, happily, our entire picnic bag is still intact.