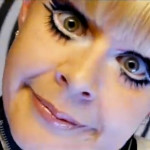 It may not be a solo single, but I’ll take any Robyn I can get: in “Go Kindergarten,” the latest music video from The Lonely Island, those dorks are joined by the high priestess of Swedish dance-pop herself, working some crazy Twiggy makeup and her latest variation on a statement bowl cut. Also joining them are Sean Combs and Paul Rudd, just for shits. I’ve been noticing an eagerness recently to dismiss The Lonely Island as tired, one-note, and in need of retirement, but what the fuck guys? I never hear that shit about Weird Al, whose career has been going on for three decades despite the fact that he does a polka on every album. I remain amused by TLI’s ongoing minute-by-minute parody of the latest trends in Top 40 music production. Plus. they have awesome guest singers.