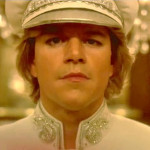 When Steven Soderbergh first began discussing how Behind the Candelabra, his Liberace biopic, somehow ended up on HBO despite its A-list director and cast, he explained that it had been rejected as “too gay” by every studio in Hollywood. While this initially seemed unlikely given the overwhelmingly gay-inclusive nature of contemporary American cinema, HBO’s first full trailer for the film was just released, and let’s just say it might even be too gay for me. Just kidding, can’t wait! But seriously, I wouldn’t be surprised if “the candelabra” turns out to be some weird sexual nickname Michael Douglas forces Matt Damon to call his asshole in the movie.