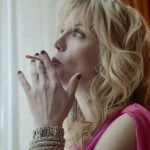 Ever since Allison DuBois aggressively puffed on an electronic cigarette while ruining Camille Grammer’s dinner party/officially launching the series to greatness on the first season of The Real Housewives of Beverly Hills, the e-cig has been searching for its next great brand ambassador. And judging by the above ad for e-cig brand NJOY, they’ve found her: Courtney Fucking Love, ladies and gentlemen. Not only is this my new favorite commercial of the year, but Courtney looks great! Like, The People vs. Larry Flynt press tour great.

And this might not be the last we see from Courtney in the near future: in addition to also being named one of the new faces of Yves St. Laurent, she was quoted in a recent interview (because obviously you can trust everything Courtney Love says on the record) as saying, “I don’t know if it’s gonna happen or not, but they’re looking at me to judge one of these talent shows. Some people go on them and they have butterflies come out of their ass. I’m not saying I’m gonna go on and be a cunt, but I would just be myself.” Internet, I hereby charge you to rise up and make this happen, if only for the sheer number of times Courtney would say, “I mean, I’m not trying to be a cunt,” on live TV before the censors can delay her.