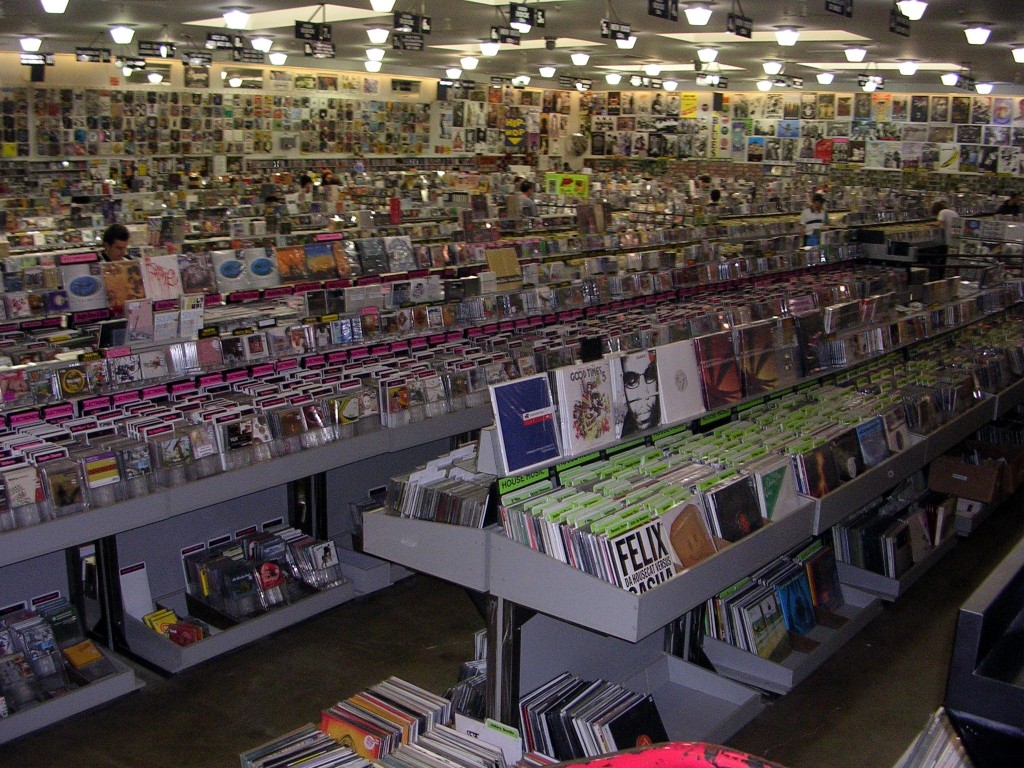 On Saturday afternoon, I did something I hadn’t done in two years. While this could refer to any number of things (as I learned from the guessing game that ensued when I told this story to my coworkers earlier today), it’s actually about something relatively boring, but very significant in my own life: on Saturday, I actually paid for music. And not only did I pay for it—I bought it on CD.

My history with CDs is long, intense, and bloody. From the youngest age, I always spent all my money on CDs. I would mow the lawn at my grandmother’s house on the weekend, then make her drive me to K-Mart so I could blow my $15 on whatever crap I was listening to when I was 11 (the only CD I can specifically remember purchasing with lawn-mowing money was Get A Grip by Aerosmith, which: just more shame).

My obsession with buying CDs has proven quite problematic over the years, especially when I discovered the narcotic thrill of mail-order CD clubs and the dozens of ways you could fuck them over (you’d be surprised how many spellings of “Jason LeRoy” they accepted as different people all living at the same address). And once I moved to San Francisco and walked into Amoeba Records for the first time, I knew that my love affair with CDs was about to hit stratospheric new heights.

But then, while working at The Sharper Image in spring of 2007, I discovered something that forever altered the way I consumed music. One day, I was searching for reviews of Joni Mitchell’s misbegotten 2007 Starbucks-only album, Shine, when I randomly came across a link claiming to be a download of the entire album. Now, I was somewhat familiar with downloading music for free; I’d become an extremely avid fan of The Hype Machine over the prior six months or so. But I was only familiar with song-by-song downloads. Entire albums? Was it possible? Would the heavens allow it?

I clicked “download,” and within a few moments, I had the complete Joni Mitchell album on my computer, in MP3 format. For free. Without so much as having to get up from my chair. This rocked me to my very core. Since my tendency with music consumption had occasionally been more about the consumption itself than the music, this opened up a full universe of new possibilities for me. And once I became a bit more familiar with the logistics of downloading albums for free, I vowed then and there that I would never pay for music again.

This was my outlook on music consumption for about a year and a half. I downloaded hundreds of gigabytes of music, much of it well in advance of its release date. I crashed at least one mighty 160GB iPod by constantly keeping it at capacity. I downloaded pretty much anything I came across. “Miley Cyrus? Why not, it’s free!”

While it was difficult at first to ween myself off of the aesthetic experience of furiously opening a CD, peeling off that goddamn security sticker, flipping through the booklet, placing the disc into the CD player—all of that started to fade once I realized I wasn’t paying for any of it. Not a cent! The addiction of my lifetime had shape-shifted and intensified, and now with 100% less cost! This felt like a rousing victory over a foe who’d bullied me out of my money since elementary school.

Then, late last summer, I watched Jen DJ at Kimos one night and realized I, too, wanted to be a DJ. And since I was basically styling myself after Jen, I knew I’d have to buy some vinyl. I’d owned vinyl as a teenager, so it was familiar to me. And so, I set off to make a few frugal vinyl purchases. But that first day I walked back into Amoeba with the intention of purchasing a record or two, I felt that old junkie blood start coursing through my veins again. I was like a gambling addict walking into a casino, or a pedophile strolling onto a playground with his pants down. So much to look at. So much to buy.

Needless to say, I wildly overspent on records that day. This was especially odd considering that I didn’t actually own a turntable yet. It was like running home with a bag full of new video games, only to remember that I never bothered buying the actual console. Eventually Jen was kind enough to give me one of the dozens of turntables that litter her room, and I made yet another vow to myself: I will continue downloading music for free. And when I really, really like something, I will buy it—but only on vinyl.

And so began my life as an obnoxious vinyl snob. I still downloaded everything I could click my mouse on, and when I heard something I really liked, I went out and bought it on vinyl. This made me feel like some sort of superior music fan, nimbly bobbing and weaving between the trendy medium of the past and the unavoidable medium of the future, all the while shunning the rapidly aging medium of the present.

However, as I soon learned, there are just a few problems with only buying vinyl: (1) records are way bigger and heavier than CDs, and they gobble up the free space in your room with alarming and wanton speed; (2) despite the fact that vinyl and CDs are sometimes comparatively priced, there are also many New Release records that run anywhere from $5-$15 more than the price of the same album on CD; and (3) not every new album gets a vinyl release. I learned this lesson the hard way when I went to Amoeba on Saturday.

I had every intention of buying the new Antony and the Johnsons and Neko Case albums on vinyl. But after unloading a bunch of shit at the Trade-In counter and armed with a receipt for $114, I discovered something awful: they weren’t available on vinyl. They were only on CD. I checked and checked and checked again, but no, my eyes weren’t deceiving me. I felt my (admittedly weak) resolve start to collapse. I still really, really, really wanted to buy them. And so, at long last, I caved.

Like a recovering alcoholic saying “Fuck it” before doing that first shot, I dropped all my pretensions of vinyl-only snobbery and prepared to once again immerse myself in my oldest and most time-honored of addictions. My life as a rabid CD buyer had returned. I threw those two CDs in my cart, and immediately sprinted off in search of other albums I’d never been able to find on vinyl. In what felt like five seconds, I’d tossed nine additional CDs into my cart. I was on a bender. I looked down and felt an almost sexual sense of satisfaction at what little room the 11 CDs occupied in my tiny Amoeba shopping basket.

Lumbering up to the checkout line with my 11 CDs and 15 records in tow, I suddenly had the (completely undeserved) sense that I was being a good, and perhaps even charitable, citizen by actually paying for music. “I’m doing the right thing,” I thought smugly. “Even though I’ve already downloaded all of these albums, I’m still going out and paying for them. I am supporting the musicians.You’re welcome.”

So here we are, and I’ve arrived at a new vow: I will still download everything I can possibly find. When I like something, I will buy it on CD or vinyl. How will I decide between the two if both formats are available? Probably by price ($10 CD > $30 vinyl) and genre. Like, if it’s a glitchy electro album that was created entirely on a laptop, I’m not going to bother getting it on vinyl. I feel like I’m at a good place. After swinging wildly from one music consumption extreme to the next, I’ve finally arrived at a place of balance (while still remaining a ravenous consumer).

This post originally appeared on The Sassmouth Chronicles on April 6, 2009.